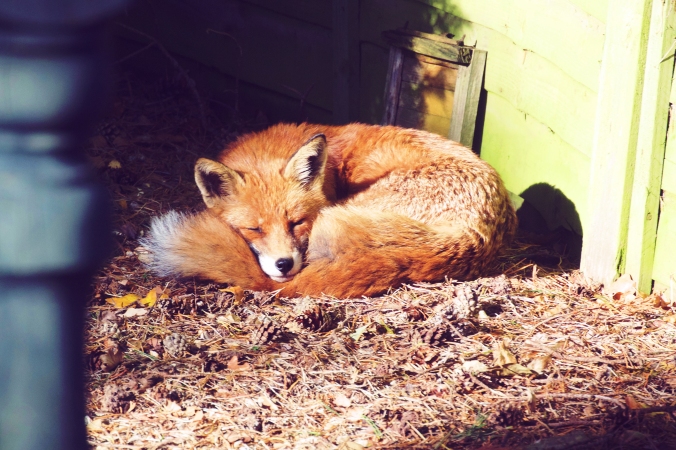 Good lord, what a wash out.  October started fine, but ended with me bedridden for an entire week with a mystery virus which I’m still trying to get over.  Nice.

Little Lord Stinky Butt
Over the course of a few weeks, we’ve had an adorable vulpine visitor to the garden.  He set up house for himself behind our shed, but would come out to stretch his legs and catch some sun every so often.  He didn’t seem fazed by me peering at him as he snuggled up in his temporary den, or by Husband and I taking a million photos.  We think he’s moved on now, but we’ll remember Stinky Butt for a long time (so named because… well…. he smelt quite strongly).

Buffering the Vampire Slayer
I’m trying to remember how I found the Buffering Podcast – I think it was a recommendation on another blog – but however I found it, I am now OBSESSED.  It’s a weekly Buffy the Vampire Slayer podcast hosted by real life married couple, Jenny Owen Youngs and Kristin Russo who are just precious!  If that description alone is not enough to get you listening, I don’t know what’s wrong with you to be honest.  They love Cordelia to the same degree I do, give awards for sexual tension of the week, and are people I desperately would love to be friends with.

All this, plus an original song each week – I don’t usually like silly made up songs, but these are slices of genius because Jenny is a brilliant musician.  I’ve bought the albums for season 1 and 2, and will no doubt buy season 3 as well.  All together now – When Daryl was in high school he played football, till he fell from some rocks and died…

Glossier
Thank goodness Glossier has finally launched over here, as I was experiencing some serious fomo.  Despite going to NY twice this year, I somehow managed to forget to visit their showroom, so snapped up their phase 1 set and some Cloud Paint on launch day to see what all the fuss was about.  So far, I’m really enjoying their moisturiser and Birthday Balm Dotcom.  Not so keen on the Milky Jelly Cleanser, although that’s mainly because rose scent makes me feel a bit queasy.  I now need to figure out what to try next.

Lurgy
I always boast about how quickly I can bounce back from an illness.  Not this time.  I spent the overwhelming majority of the last week in October under the duvet, only emerging to watch Strictly and The Defenders finale.  The prolonged recovery time has been quite unnerving for me – I know I’ve been run down so that’s probably part of the reason but I’m genuinely not used to being out of action for so long.  Nearly time for our holiday though, so that will give me some more time to get over it.