The second part of our mini-break/week holiday was spent in a tiny hamlet just outside of Bude called Coombe.  The Landmark Trust owns all the properties in the hamlet, including the one which we would call home for the next five days – Coombe Corner.  We stayed at a Landmark Trust place a couple of years ago (the epic Castle of Park) so our expectations were high.  Perhaps a little too high.  I won’t go into the problems that we had with the cottage as it seems unfair to moan, especially because the Landmark Trust have apologised to us.  It wasn’t a disaster by any means, but it certainly didn’t make an impact on us like the Castle of Park did (where the bath tub there still features in my top five baths ever*).

Anyway, we got into the house just before 5 as the sun was setting over the valley and we settled in to having no TV, Wi-Fi, or even phone signal.  It was a little unsettling to be alone in the middle of nowhere without a phone signal so we tried not to think about it or have an accident (nearest signal was a mile down the road at the beach).  I don’t think we got used to that the entire week, but we did have some films/TV shows on Husband’s laptop to distract us from the solitude.

We didn’t have a great night’s sleep – we were both awake at 4am so took the opportunity for a bit of star gazing through the living room window which was pretty spectacular.  We got up properly a couple of hours later and decided to drive the hour or so down to the Eden Project.  We visited on such a great day – it was bright and sunny and barely anyone was there.  We didn’t quite have the biomes to ourselves, but it was still pretty much crowd free.

It’s an understatement to say that the Rainforest Biome was hot, and I didn’t manage to get any decent photos in there as my camera remained steamed up the entire time – I gave up wearing my glasses!  The cool room was amazing though, and we really didn’t want to go back out into the humidity! The Mediterranean Biome was much more pleasant, and really made me miss summer.   I loved all of the little eco-systems under the domes, and found it such a fun place to be – I really didn’t think I would like them as much as I did 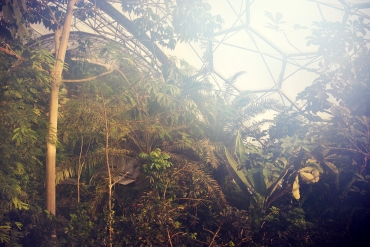 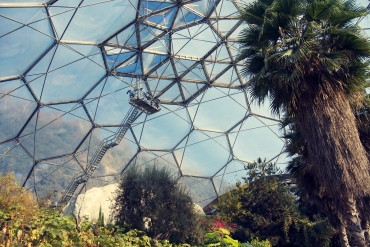 We got lunch from the Eden Kitchen and sat outside – I had a really delicious coq au vin and Husband had steak and ale pie.  So yummy.  We had a quick wander around The Core before buying bamboo socks and popcorn in the shop (although I could have bought a lot more) and got back to our car for our next stop.  A stop I will regret forever.

When I was eight, I went on holiday with my grandparents and great-aunt to Cornwall.  I remember quite a lot of that trip, and in particular, I remember visiting a shop called Trago Mills and getting a teddy and some roller skates.  It has lived on in my memory as an amazing place, so I thought it might be fun to revisit that store.  This is despite my Mum saying to me a couple of days previously “don’t go there, it’s a hellhole”.

Well, it was a hellhole.  Unfortunately, eight year old me wasn’t particularly political minded so didn’t realise that it was run by a right-wing nutcase.  I had repressed how awful the shop is, with anti-EU signs and statues outside.  No, really.  We would have walked straight out again, but we got lost.  I was quite terrified that we would end up having to live there.  Fortunately, we found the exit and ran to our car, not looking back once.  NEVER AGAIN.

We quickly popped into a normal supermarket (for some sanity) before getting back to the cottage.  Snuggling up together again in front of the laptop, we watched a film before going to bed.

*Thank you for asking:

Honourable mention goes to the bath at my in-law’s house.