Today was the day we were most worried about in terms of finding things to do as the Danes have Christmas Eve (juleaften) as their main event.  We decided to let it go and do nothing.  Just have a wander about.

We headed up to Kongens Nynorv again, and walked down to the Kastellet fortress.  Not before coming across a group of (presumably) American expats singing the American national anthem at the top of the Metro steps.  It was one of the many surreal things we witnessed on this trip.

At the Kastellet, there were so many people out walking and running – it was busier than I’d ever seen it!  Random wandering then took us past Amalienborg Palace just as the Changing of the Guard was happening – very touristy of us, but we stopped to watch as we hadn’t seen it before.  There wasn’t any fancy music, so I think we saw the Palævagt or Palace Guard. 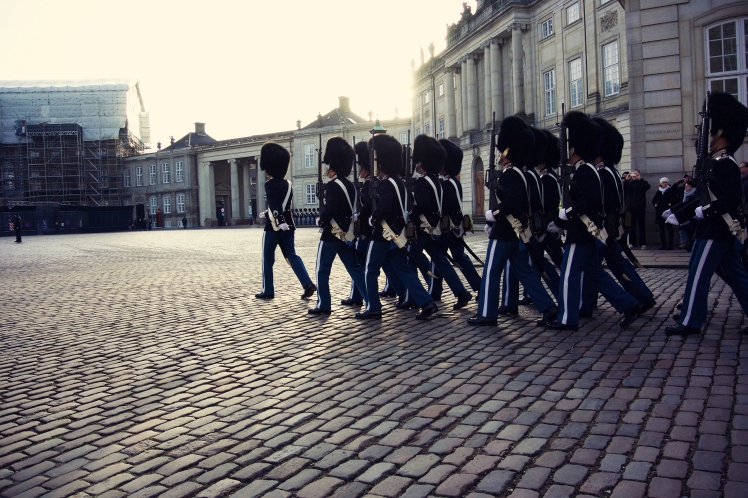 We very pleased to find our Baresso was actually open for a couple of hours, so we stopped by Kongens Nytorv after watching the soldiers for another jul latte.   Oddly, everyone sat around us was British  – I guess us brits need our coffee.

We then took our time and walked back to the hotel, over to Islands Brygge and through Amager Fælled.  We were very excited to stumble across the Cirkelbroen which is a beautiful new bridge, and even saw people taking a dip in the harbour’s dipping pools (before they rushed back to the sauna carts).  It was quite cold at this point, so those people were incredibly brave!!

The walk took us through the residential areas along the harbour and I wouldn’t normally recommend that for tourists to do, but the apartments were so stunningly Scandinavian and I loved it.  There was a monstrous circular block called the Gemini Residence which was so intimidating and gorgeous.  It’s made from two converted seed silos, and still has a very brutalist concrete cylinders at the base.  I want to live there.  I wanted to live in most places we walked passed.

In marked contrast, Amager Fælled was stripped back and stark.  I’ve walked through this park when it was snowy and I’m sure it’s beautiful in summer as well, but I love it in winter.  Plus, you can see our hotel from the middle!

We’d walked quite a bit by the time we got back to the hotel, so I had a lovely nap and Husband played a game on his phone that he became obsessed with.

Dinner was just in the hotel as we knew nothing would be open, and was surprisingly lovely with free prosecco to start, and a free little bag of treats to finish.  We then decided to try out the Sky Bar on the top floor where we got yet another glass of free prosecco (YES!) and had a couple of cocktails.  We stayed up there until closing time and then stumbled one floor down.  I mean, I’d had four alcoholic drinks by this point – this is the most I have had in one night for a very long time.

2 thoughts on “Christmas in Copenhagen – Juleaften”