Before our trip to Miami, we were looking for somewhere special to celebrate my Mum’s big birthday.  We had also become obsessed with The Assassination of Gianni Versace.  These two seemingly unrelated elements led to us discovering that Versace’s former house on Ocean Drive had been converted into a hotel and restaurant so we just had to book a table at Gianni’s – the restaurant at The Villa Casa Casuarina.

The villa has had a complicated history – built back in the 1930s, converted into apartments shortly after and had its ups and downs before Versace bought it in the 1990s who converted back into one mansion.  He also bought the property next door and created a beautiful outdoor space (although not without controversy).  After his death, it continued to have a troubled existence, but seems to have been a little more stable since opening as a hotel a couple of years ago.  It’s definitely earned its iconic status.

South Beach at night really isn’t my style.  I’ve never really been into partying or bar hopping and this is pretty much South Beach’s primary purpose (it’s why we’ve enjoyed our hotel up in Surfside).  But Gianni’s was definitely worth the effort.  We decided to splash out on an Uber Lux, and pulling up to the front of the villa in a big fancy GMC… car (I’m not good with American cars) felt really special.

We were shown in to the restaurant at the front of the hotel – there were a couple of different areas dotted around the ground floor including the terrace and poolside and whilst it would have been amazing to sit out by the pool, it started raining about half an hour into our meal so we were happy to be inside! 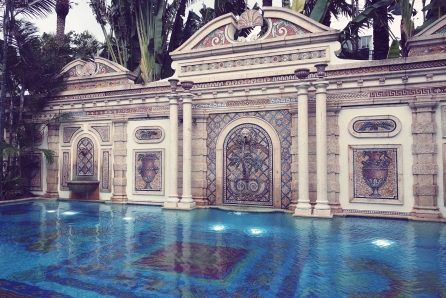 Whilst we waited for our food to arrive, Mum and I scampered around looking at the beautiful decor.  It was outrageously over the top and not remotely my taste, but that’s exactly why I loved it!  The staff were happy for customers to walk around, but didn’t allow tourists – one couple were asked to either book a table or leave as it wasn’t a “tourist attraction” which I did appreciate (mostly because it made it easier for us to look around).

The food itself was expensive of course, but very enjoyable.  There’s obviously a premium for being in such an amazing location, but we all ate really well.  I wasn’t going to have dessert, but couldn’t resist trying a red chocolate mousse.  It was phenomenal.

I will confess that I had fairly low expectations – I had a preconceived idea on what the food and service would be like, but we had such an unexpectedly great evening!  It’s nice to go fancy every once in a while.

After the meal, we took a wander down Ocean Drive to see the art deco buildings lit up at night.

Really very pretty, but the rest of the strip just confirmed what I’ve always thought – South Beach at night isn’t for me.  Interesting, but definitely not for me.  Wow.