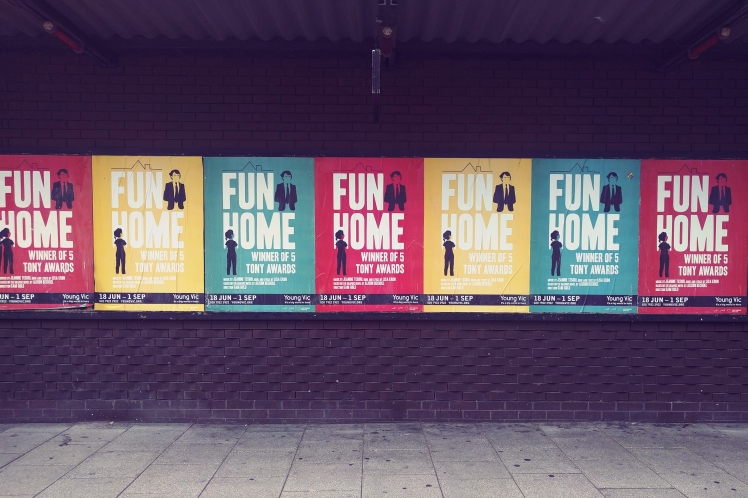 Oh June, what a mixed month you were.  I thought it would just be an average month, albeit with a couple of excellent trips planned, but that all changed right in the middle with some very stressful work news (I’m being deliberately abstract).  Needless to say, ending the month by working 10 hours a day was not where I saw myself.

We did get the “premium” catering for a workshop the other day though, so it’s not all bad.

Fun Home at the Young Vic

Think of Bechdel when you need to embalm.

Flight of the Conchords at The O2

Have you ever been asked if your hair is a wig?

On the face of it, this does not look like my type of show – a wealthy family lose all their money and are forced to live in a run-down, small town motel.  However, with Husband away for work for most of the month, I quickly ran out of Netflix shows to watch so gave the first episode a go.  Inexplicably, I became addicted and watched all 4 seasons in a week and a half.

It would be easy to see the characters as stereotypes, and that’s definitely how it started, but there’s such a charm to them all.  Catherine O’Hara’s portrayal of Moira was the main reason why I continued watching, but I then fell in love with Dan Levy and Annie Murphy.  The show has rarely made me laugh out loud, but has made me teary on a couple of occasions which is why I’ve continued watching -there’s a surprising amount of heart.

Considering we’re in a ridiculous heatwave at the moment, it seems a bit odd that I’ve bought some boots, but these glorious Grenson Annie boots were on sale and I couldn’t say no.

Just need it to be cold now please.

My left eye had got super twitchy recently, and an eye test showed that my prescription had changed slightly so I got some new specs.  Whilst the twitching has subsided, I’m not sure I actually like the glasses.  One – they’re by Kylie Minogue.  Two – they’re called Spinning Around.  Three – the arms are silver glitter.

I was hoping for something cool and minimalist, and somehow ended up with a pair that border on crazy.  Why is it so hard to buy a pair of glasses?!?!