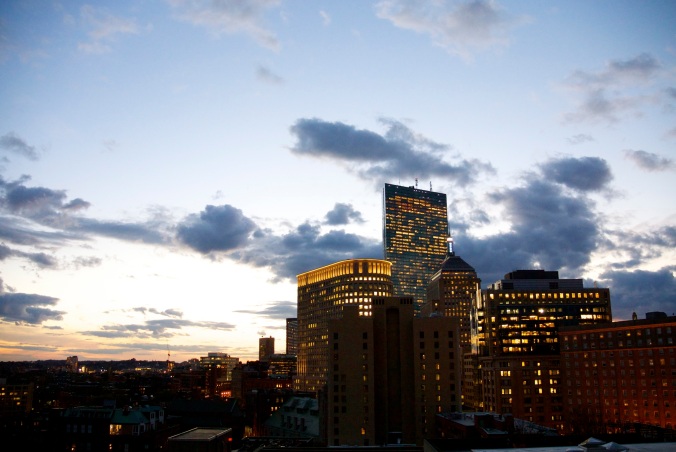 The view from our balcony

Miles travelled
52 in the car, about 5 miles on a bus!

Where we stayed
Revere Hotel, Boston Common, Boston, MA.  Really nice hotel, AMAZING toiletries (Skoah spa toiletries – my hair was so shiny!) – I really enjoyed our stay.  We didn’t get the room we booked (two beds instead of a king size) but at least we could fit in one bed so we didn’t mind too much.  We were also supposed to get champagne on check in but that didn’t happen either – probably for the best as I would have fallen off the balcony or something.  But yes, a balcony overlooking lots of pretty buildings.  It wasn’t cheap, but we accepted that we had to splurge to enjoy Boston.  We stayed here for three nights, so there would be no more hotel hopping.

Where we ate
Panera again for lunch.
Fast food for a pre-gig dinner.

Photos
Day Twelve – my photo timeline looks a little messed up as my camera was on UK time, but my phone was on America time, and I didn’t want to take my camera to the gig.

We woke up with heavy hearts today.  We knew that today would be our last day with Walter, our beloved rental.

OK, perhaps it was just me with the ridiculous over-attachment to inanimate objects, but I felt sad that we’d be leaving the car behind after 1400 miles!  Husband just felt quite anxious about driving to the airport.

We woke up (in separate beds – ack!) to the sound of our free morning coffee being left at the door which was a lovely start to the day – thanks Omni Providence!  We had already packed last night, so there was nothing left for us to do except wait for rush hour to die down before heading out up the I95.

The drive was actually quite easy.  Things got busy and a little bit hairy as we got closer to the airport, but everything is well signposted and we found the rental place without any problems.  The big Logan Airport rental parking lot on Transportation Way is done so incredibly well – they direct you as per your rental company, so we just followed the signs for Budget, found our way to the drop off bit and then said farewell to Walter.  You did us proud, little Jetta, and your door compartments were just the right size for guide books on my side, beef jerky on Husband’s side.

Anyway, getting into Boston from the airport was almost too easy.  We jumped on the rental bus back to departures, made our way downstairs to the Silver Line bus stop, plopped ourselves on a bus and let the bus driver do all the work.  All this was FREE.  Did you hear that London – a free bus to take us from the airport to downtown Boston.  I’m still not quite over how brilliant that is.  And to make it even more brilliant, halfway through the journey, the dual-mode bus turns electric and goes underground in it’s own tunnel.  Husband and I stared at each other in absolute wonder.  This is the freaking future.

When we planned the trip from the airport to the hotel, we hadn’t planned for me to have a busted ankle (I know – it does feel as though we should have expected this) so the actual walk from South Station to our hotel on Stuart Street was a tad more laborious and  painful than we thought.  I think it took about half an hour instead of 15 minutes, and in hindsight we should have just got a taxi.  Never mind.  We had a quick stop at Panera, where I experienced my first bit of Boston fieriness, when a customer started yelling at the woman behind the till for no reason.  The employee seemed to take it well though, and gave as good as she got.

The hotel was only about a minute away from Panera, so we checked in, marvelled at the beautiful room and balcony, then went for a walk to try and get our bearings.  We ended up walking through Boston Common, down Washington Street (and accidentally into Macy’s where Husband treated me to some Bobbi Brown make-up) and all the way down to the Harbor.

Out for a wander

We didn’t spend too long out, as we had a gig to get ready for, and I had new Bobbi Brown make-up to put on.

Husband is really into a band called Fitz and the Tantrums, and when we were looking around for fun things to do in Boston, he was really pleased to see that they’d be playing a gig at the House of Blues.  We ended up getting tickets quite far back on the mezzanine level, so we didn’t know how good the seats would be, but we figured they couldn’t be dreadful.

We walked to the House of Blues, stopping at a Wendy’s on the way so we could grab another Pretzel Pub Chicken – there was a Celtics basketball player in the queue behind us, and I of course only know this because the homeless man in front of us was saying “hey, you play for the Celtics”.  And he was tall.  Some of the streets around the House of Blues were a bit scary so we walked as quickly as we could, but eventually we got back to civilisation and queued up to get in.  We got asked for ID which completely threw me as I wanted to say “CLEARLY WE ARE IN OUR THIRTIES” and fortunately, I had both of our passports on us.  The doorman wasn’t ready for weird British passports.

Our seats were actually really good – we had a great view!  The tour was called The Bright Futures Tour, and was a co-headlining tour which we didn’t realise until a bit later.  First on was an LA band called Beat Club, and they were really good.  I’ve listened to their EP a bunch of times since getting back home (I’m listening again to it now) – live, they sound a bit like Simple Minds mixed in with the Strokes with a little bit of the Blade Runner soundtrack and a little bit of the Ramones, and I really hope they make it big.  I do love a band that embraces synths.

Second up, and the co-headliners, were Capital Cities.  Again, not a band that have made it to the UK yet, but they were incredibly popular with the crowd.  They had some catchy songs, including Safe and Sound which I think got to number one in the Billboard Charts, but they ended by dancing around on stage to a remix of their own song which felt a little odd to us.  Everyone else loved it though so they’re clearly doing it well.  They were teaching the crowd a little dance routine and everyone got into it – I very much doubt that would happen at most UK gigs.  It was really amusing to look down on the crowd from the mezzanine to see them all doing the same routine.

And finally, Fitz and the Tantrums.  I must confess that I had listened to their second album a few times before the gig, and it hadn’t grabbed me but hearing it live really did.  Michael Fitzpatrick and Noelle Scaggs were fantastic together – their voices were phenomenal.  There was so much energy and passion and you couldn’t help but really get into it.  Out of My League was probably one of my favourites from the night, as was The Walker.  The staging was really good as well – their ‘neon’ heart backdrop was actually more like a video screen (Husband understands the tech more than I do) and there were amazing patterns and colours to match the music.  And at the end – the classic confetti cannons.  I have listened to their album a heck of a lot more now, and I’m even considering going to their London gig in March.

Fitz and the Tantrums

As the gig ended, we all shuffled down to the exit, where the House of Blues managed to thoroughly piss everyone off by messing about with the queues.  Our two options were merch stand or coat check – there didn’t seem to be an option for exit and every time someone asked, they kept shunting us into different queues.  We eventually managed to get out, and sang our way back to the hotel on a post-gig high.  In my 17 years of going to gigs, this was my first overseas gig which has pleased me greatly!