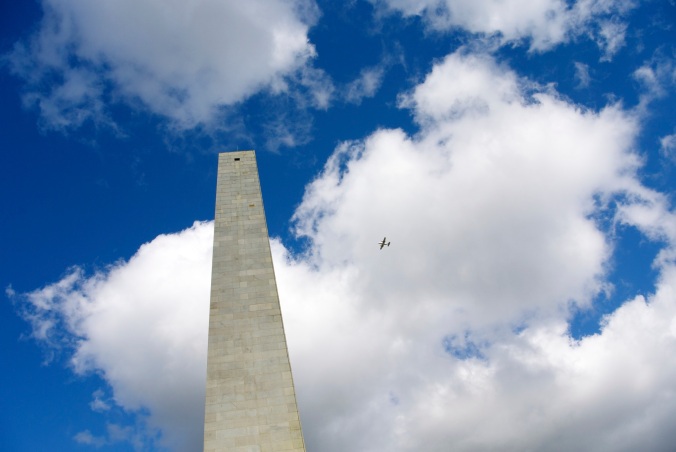 Where we stayed
A second lovely night at the Revere Hotel, Boston Common, Boston, MA.

Where we ate
Starbucks La Boulange savoury square – yummy.
Cheesecake Factory for dinner.  OMG, so much food, it was ridiculous.  We shared a quesadilla to start which was a very stupid idea as this was far too much food.  Husband had a GIANT chicken salad for his main and I had an Americana Burger.  We took away our dinner to eat back at the room – Red Velvet and Chocolate Tuxedo.

My plans to start the day with a relaxing bath went to hell as I discovered the plug hole was broken.  Curses!  I would later google how to block a plug hole without a plug (pro tip – soak a flannel or hand towel and use that to seal the hole.  Worked a treat!) but in the meantime, I had a not-so relaxing shower.  We did report the problem, but it didn’t seem to get fixed – we got the impression that the front desk staff member was just updating her Facebook status about the annoying British people complaining about a plug.  The Skoah toiletries made up for it though.

Today was going to be a bit of a test as we knew we wanted to walk the Freedom Trail, but I didn’t know how well I’d do on my ankle.  The Freedom Trail is about 2.5 miles long, but we somehow managed to do a little under 12 miles throughout the whole day (according to my Fitbit).  About 1.5 miles of that was walking to and from dinner, so we must have done a significant amount of detours to get up to 10ish!  I suspect this might be some of the reason why my ankle is still bad now – I did not go by the RICE method at all.  American medicine helped me along a little bit.

We went over to Boston Common to find the start of the Freedom Trail – the red bricked line that would be our guide for the day.  It took us first up to the New State House which had a huge “Go Sox” banner on the front.  They’re obviously very proud of their team.  We then walked over to the King’s Chapel Cemetery which looked very picturesque in the dappled sunlight.  We walked passed the Old Corner Bookstore (which is now a Chipotle!) and decided to go in to the Old South Meeting House.  It was surrounded by scaffolding so I didn’t have high expectations but it was really good!

The museum is set around the edge of the seats in the meeting house, and whilst we were there, some school children were having a historical debate, pretending to be figures from the American Revolution and Boston Tea Party, so we’d hear them yelling in agreement or disagreement every now and again.  It was really fun to watch them getting into character and their teacher was really enthusiastic.  I actually learnt quite a lot from the museum exhibits.  I didn’t really understand what the Tea Party was before, or appreciate any of the history of the American Revolution, but I feel like now I do !  It also didn’t try to gloss over the past, so learning a bit about slavery was fascinating as well as shocking.  A great little museum.  They also had a cute gift shop (the other side of the entrance, and yet the same girl served us which confused us immensely) and I bought my Dad some Boston tea.

Next on the trail was the Old State House and the site of the Boston Massacre.  We didn’t go into the Old State House, so marched on to the next historical point, Faneuil Hall.   We didn’t go in here either, but we did get exasperated by the idiot vans parked on the pavement.  We had to squeeze passed them, grumbling about inconsiderate drivers, before realising that they were probably getting ready for Obama’s speech the following day.  How exciting.  We deviated off the red brick path to walk around Faneuil Hall Marketplace, which was very pretty but seemed to be full of touristy shops. 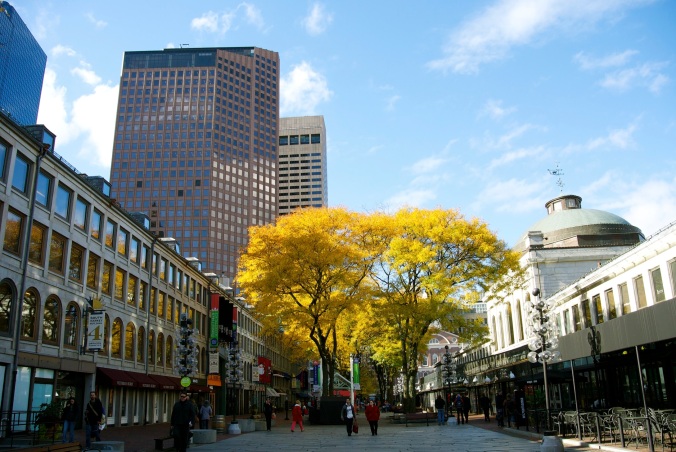 After this, we cut across Route 93, watching a woman spectacularly drive the wrong way down a road, and into the North End, a neighbourhood of Boston that’s also known as Little Italy.  There were some really nice looking restaurants here, and if we had more time, we’d definitely have gone here for dinner.  We walked passed (of course) the Paul Revere House and the statue of Paul Revere, who was wearing a Boston Red Sox shirt, and up to Old North Church.  The church grounds were packed with children and costumed tour guides, so we took a brief look around before walking up to another cemetery, Copp’s Hill Burying Ground.  We were a bit disappointed in this site, as there as a footnote on one of the info board saying that many of the grave stones had been moved to make space for a pathway.  That sucks!

On to Charlestown, and to get there we had to cross the Charlestown Bridges which was CRAPPING TERRIFYING.  I’m not the best at crossing bridges at the best of times, but I usually manage it because most bridges don’t consist of just GRATING that you can clearly SEE THROUGH TO THE RIVER.  I freaked out  a lot and was almost in tears at one point, but I managed to get across – go me.  I was rewarded with a sit down in the City Square Park, where Husband perked me up by singing the “Let’s Go Bruins” song at me, only with our names instead of Bruins.

A quick top up of Ibuprofen, and we walked on to the Bunker Hill Monument.  There wasn’t even a question of walking up the 294 steps, what with me being broken and Husband being fearful of Heights, but it was to wander around the area looking at the house.  We really liked the big houses around Monument Square, and decided that we’d like to live here when we grow up.

The last stop on the Freedom Trail tour was the USS Constitution.  We did the museum first, which was informative and had lots of games (for kids) that I enjoyed playing.  Husband then wanted to go on the ship, and had read that it should have been open today, but the sign on the front said it was only open Thursday-Sunday.  We stood around confused for a bit, before deciding that we wouldn’t bother asking so just looked at the ship from afar.  It looked quite ship-like.

Back over the river (*freak out freak out freak out*), back through Boston, and safely back to our hotel room with a Starbucks, after which I proceeded to have the first nap of the trip.  I had my feet wrapped up in the comforter on the bed, which was the softest material I have ever touched (you could buy the comforter for about $300 which I was seriously tempted by…) which made it a lovely lovely nap.

I woke up refreshed and ready to stuff myself with food, so we walked over to the Cheesecake Factory in the Prudential Center.  We got confused by how to get in (two entrances!) picked the wrong one, but only had to wait about 5 minutes before we were seated, which is amazing for the Cheesecake Factory.  We even had a great table, on a raised bit at the back of the restaurant so we could people watch whilst we ate All The Food.

As is tradition with us, we got our cheesecake to go and took it back to the room, sneaking it in to the hotel so they staff wouldn’t judge us.  I managed to finish mine, but Husband didn’t (his was bigger than mine) as we watched the American X-Factor which was CACK!  I then successfully had a wet flannel bath, and we settled down to sleep with tired legs from our long day.