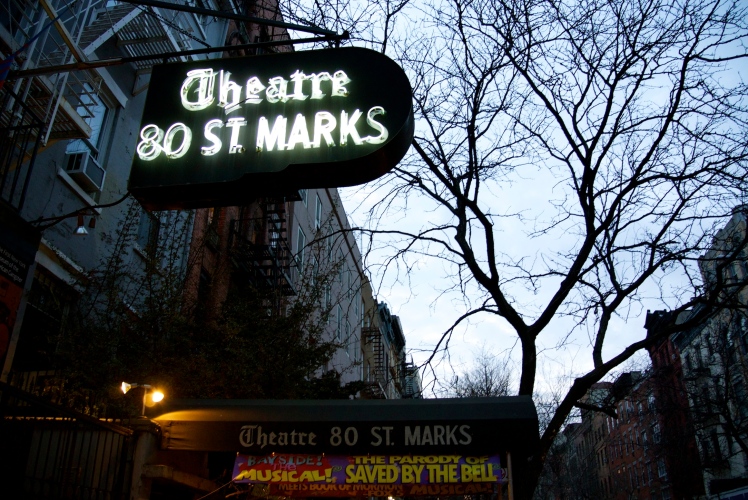 Picture my misspent youth – wasting the day watching Saved by the Bell, California Dreams, and Clarissa Explains It All on repeat.  So a Saved by the Bell musical was bound to be one of my favourite things ever.  Our first full day in New York ended with us sitting in the cute Off-Broadway Theatre 80 with a lot of high spirited Young People (and some nerds like me too) waiting for the cast of Bayside the Musical to come onstage.

Adam Lash warmed the crowd up (and was very adorable) but to be fair, most of the audience didn’t need warming up and burst into unrepentant laughter as soon as the curtain went back and the cast started singing Back to Bayside.  This song is crazy catchy and helps set the scene for anyone who has never seen an episode of SBTB – but then, why would you be here if you hadn’t seen at least one episode.

We then were taken on a whistle stop tour around some of SBTB most ridiculous plots – Becky the duck, Malibu Sands, Screech’s Secret Sauce, Slater’s pleated jeans.  By the end of the show, everyone was begging for Jessie’s caffeine addiction, and her demented descent into madness was played to perfection by April Kidwell.

Sam Harvey and Katie Mebane had Zach and Kelly down to a T, Sam playing up the arrogance and Katie playing up the ditzy.  I loved how Kelly’s number of brother’s increased as the show went on – I think the final count was 16.  Kelly and Zach’s vociferous chair dancing actually broke the furniture about midway through the show which brought the house down.

John Duff’s Slater had a homoerotic edge I’d forgotten from the original show, although the subtext quickly became text.  Added to that, he has an amazing voice, probably the best in the show.  His mullet was a little disturbing, but I’m pretty sure it was fake.  Take away the mullet and singlet and he’s actually quite dreamy.

I could not imagine another actor who can play Screech as well as Dustin Diamond, but Justin Cimino proved me wrong. The way he walked around, the faces he pulled – I could have believed this was Dustin, if it wasn’t for the fact that the performance we saw featured Dustin Diamond (playing a hilariously grumpy version of himself).  Screech spent the musical deciding between Lisa, played by Shamira Clark, and Tori Spelling – she wasn’t ever referred to as Violet – played by Amanda Nicholas who was great as Tori and Miss Bliss.  Lisa’s discovery that she’s actually black and her transformation into Oprah X was amazing!

Finally, possibly my favourite actor in the musical, Seth Blum who played a bunch of characters including Mr Belding, Mr Carosi, and bizarrely, Tori, the Sex Kitten from Hell.  He almost made the cast lose it when he accidentally sat on a Twinkie and forgot what he was supposed to be singing.

And yes, Dustin Diamond!  He was very self-deprecating and managed to fit in perfectly with the plot.  He even did a signing and photos at the end and he came across really well.

It was so so good and I desperately want to see it again. I really need this show to come over to the UK.  For now, I’ll have to settle with listening to the soundtrack on a daily basis.  Although I should remember to turn it down in the car when Miss Bliss starts singing “those f**kers can burn in hell”.

Some of my favourite moments

I will never again be able to hear “Where is My Mind” by The Pixies without segueing into “It’s a dream sequence, it’s got nothing to do with the plot”.