A couple of months ago, I was sat in a conference hall in Manchester listening to a very important man talk about very important things, whilst sneaking a look at Twitter.  Tim and Rach were in the middle of a conversation about Coronation Street tour tickets going on sale, and because I don’t know how to mind my own business, I butted in and demanded to go with them.  About 10 minutes later, the tickets were booked and I immediately began to get a bit giddy like a dork.

I haven’t watched Coronation Street for a very long time so I have completely lost touched with what’s going on.  However, I spent quite a large proportion of my childhood watching the soap opera with my parents, and I still remember so many story lines – that kind of nonsense never leaves my brain.

Last weekend, we finally made the journey up to Manchester.  On the train, no less.  Which in hindsight perhaps wasn’t a good idea because of goddamned maintenance near Euston.  It also appears as though pretty much everyone in the south was travelling to Manchester that Saturday, so much of our journey was spent rammed into the carriages.  I chose this moment to put my assertiveness training to the test when I discovered some drunk hen party attendees were sat in our seats, but I think the sweet old man who sat opposite us had it worse as he had to endure their penis straws for longer than us.  Bless you, old man.  Bless you.

We eventually made it to Manchester Piccadilly, slightly sweaty and getting more bolshy by the second (mainly me).  We were staying at The Place Aparthotel, just around the corner from Piccadilly, and although we were too early to check in, it was easy enough to dump our stuff.  The receptionist did his best to confuse us (“I was just going to call you – would you like two apartments?”  No.  How about you give us what we booked?) but all was OK as we walked over to Quay Street Studios.  But first – LUNCH!  We found Taps Pour House in the Great Northern Square where I got giggly at the thought of pouring our own beer.  And I don’t even like beer! 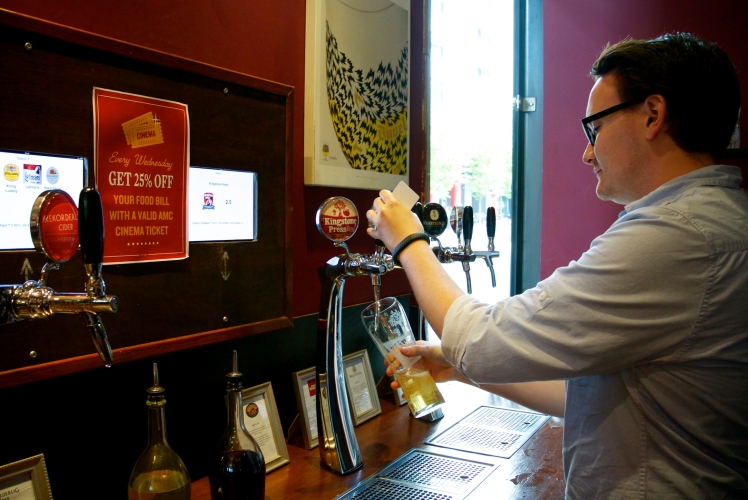 Tim was an expert.  Rach made me pour hers and I was… not an expert.  You might say I was TERRIBLE.  I have decided not to become a barwoman.  Yes, the pub was gimmicky, but the food was great even though they forgot my sweet potato fries.

Sufficiently stuffed, we wandered over to the tour, got our backstage passes (HEE!) and waited a few minutes for the tour to start.  We had a great tour guide who showed us the behind the scenes stuff first of all – the green room with many many pigeon holes for the actors, the dressing rooms – mostly closed but with a couple of open doors – the costume room, and corridor upon corridor of depressing wallpaper.  What struck us was how crappy everything was, which sounds bad but it’s fascinating to see what the cast and crew had to live with.  When you think of a TV show, you think of fancy furniture and decor but they really didn’t have this at Corrie.  It was a little bit like an old folks home which was astounding.  No wonder why they went over to a new studio.

We were then shown a short montage of clips featuring many from my era.  I felt myself getting quite teary at some points.  Oh shut up, you would too.  The montage room was like a holding pen as we had to wait for the tour before us to move on – they’ve got quite a slick operation with tours every 10 minutes.  Next up – sets.  We saw Gail’s kitchen and living room, and Carla’s flat (I wasn’t too sure who Carla was) and then the tour guide pulled out the big one – the Rovers.  We sat in one of the booths (MORE HEE!) and the guide gave us the opportunity to have our photo taken behind the bar.  HELL YES.  We didn’t have to buy it (we did) but it was so fun to just be behind the bar.

Out through the toilet door, we saw a couple more sets including the Underworld knicker factory, a barge (again, I wasn’t familiar with this plot) and Jack and Vera’s living room.  I started to get a bit emotional again as the guide pointed out the chair that Jack and Vera had died in, then a bit creeped out, before I remembered that no one actually died in the chair and that this was all fictional.

We were marched through the production suite, the guide telling us that this was the boring bit.  Yeah, maybe boring for some people but this nerd wanted to see their tech!  Their Christmas decorations were still up as they’d moved out over Christmas a few years back and there were some holes in the wall where they’d taken some tech to the new studios, but we were whizzed through this bit so I couldn’t look at it in that much detail.

We were gathered up in front of some doors which we guessed would be the doors to the street and the end of the formal part of the tour.  Tim commented that the tour was quite theme tune light as we hadn’t heard it at all by this point but of course they were saving this until the end.  She pressed a button, the doors flew open, the theme tune started, and I cheered.  No really, I did.

We hadn’t been allowed to take any photos so far but when we were let loose on the iconic street, we were allowed to go nuts.  And we did.  We spent ages wandering around the houses, the gardens, Rosamund Street, Victoria Street.  So long that the guy at the photo counter felt the need to comment on it.  Hey, we needed to get our money’s worth!

How can you not love this?

We reluctantly dragged ourselves away and back to the hotel and checked in to our RIDICULOUSLY HUGE apartment.  We had a living room, two bedrooms, two bathrooms, and kitchen, and we could very easily get lost in it.  Such a great base for our weekend.  I had a quick shower to get the train grim off me, and then we went pretty much straight out to Missoula and The Alchemist for dinner and cocktails.  I don’t drink very often, so two cocktails sent me into La La Land.  I got giggly at pretty much anything (including a poncho sold in Londis). 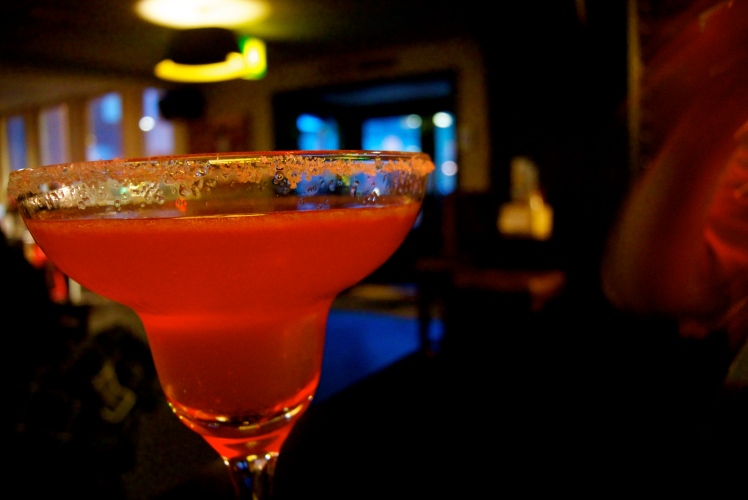 The Alchemist was great fun as we watched the insane cocktails being made.  Conical flasks, bunsen burners, mini-saucepans, and lots and lots of fire.  So much fire that a woman’s handbag got set on fire at one point.  She seemed ok with that.  After waiting far too long to get served (I am out of practice for bars), I had my Cola Bottle Libra which I was amazed to discover tasted exactly like cola bottles (kinda the point).

I avoided a hangover on Sunday morning (YES!) and we trundled back down to the much quieter Missoula for some yummy breakfast and 100% less Rihanna than the previous evening.  Our train journey back was much more relaxed as well, despite having to race to get our connecting train as The Train Line had horribly miscalculated the journey.  Thanks for that.

It was a whirlwind trip to Manchester, but so much fun.  I have now vowed to not look at another long distance train for another year as two days after Manchester, I was on another train to York (and back, on the same day) for a meeting.  I’m tired just thinking about it.

You can see more of my photos on my Flickr.

2 thoughts on “You’re Norman Bates with a briefcase”