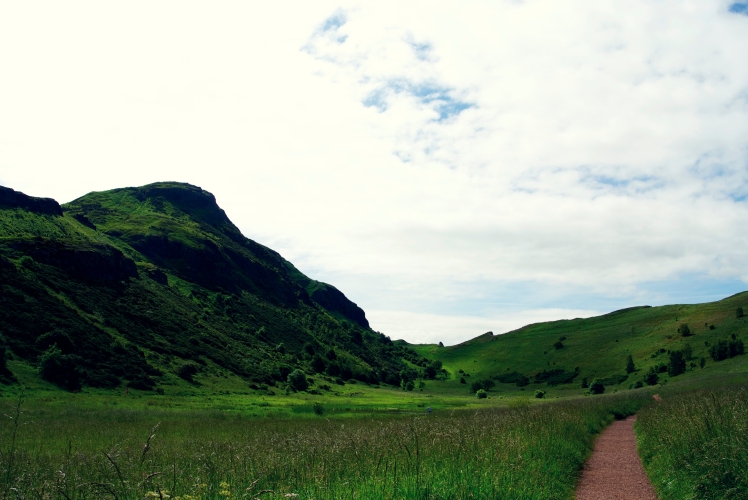 It seems astonishing that just a 15 minute walk from our Edinburgh city hotel is a flipping volcano.  OK, so it’s extinct but it’s also extraordinarily beautiful and it would have been crazy not to visit.  We wanted to make the most of the beautiful weather we’d woken to, so quickly grabbed a coffee and headed straight over to Holyrood Park.

In hindsight, it was perhaps a little too hot to be clambering about on the hill, and despite wearing light clothes, we were soon sweating buckets.  We got about halfway, and I begged Husband to not go any further, so we joked that we’d managed Arthur’s Chair Leg.  Still, we had a lovely (sweaty) walk, and a gentle stroll back down into the city.  Edinburgh residents are so lucky to have this.

We walked along the slightly manic Royal Mile over to the castle and paid the (IMO) extortionate entry fee.  Knowing how much we spent to get in, I really didn’t enjoy the castle which was disappointing.  The views over the city were amazing, but we got a similarly amazing view in Gozo from the Victoria Citadella and that was free.  Perhaps not a fair comparison, but it’s what came to mind.  We were there for the one o’clock gun so watched that go off (meh) and then went over to the Crown Jewels exhibit.  I will admit to not reading any of the displays, so when we got to the end, I turned to Husband and said “so, what’s this about?”  It just felt so… boring.  I probably missed a lot of other history, but I just wasn’t feeling it that day.

We spent about an hour in the castle, and walked out underneath the big stadium seating that they were setting up for Tom Jones.  Literally underneath it, as the contractors were fitting the seats to the structure.  We didn’t really have a plan at this point, but it seems as though whisky was calling Husband’s name and we found ourselves crossing the threshold of the Scotch Whisky Experience.  I had been forewarned by Trip Advisor reviewers that it was cheesy and the start of it was super mega cheesy.  Our tour guide, a lovely Swedish man called Marcus, loaded us into our barrels (yes, barrels) and we went on ” swirling, bubbling barrel ride through a replica distillery as you become part of the whisky making process”.  OK then.  It did feel a bit like a really inappropriate kids ride!

Marcus collected us again at the end and we had a short video and ‘lecture’ about the different areas of scotch whisky, which was actually interesting.  I knew a little bit about it – a couple of years ago, Husband, Tim, Jaina, and I were treated to a tour at the Bladnoch distillery, which was a real treat as we weren’t charged and they gave us a lot to sample at the end.  But the Scotch Whisky tour gave us a bit more context and detail about the other regions.

Sidenote – I’ve just gone to the Bladnoch website to find that they’ve gone into liquidation.  I’m genuinely sad about this as they were lovely people who were remarkably welcoming to us that day.  I hope they can find a buyer!

After the video, we smelt each region’s whisky on a scratch card (sounds odd, but effective) and then decided which region we’d like to taste.  I decided on Speyside, and Husband chose Islay.  As a non-drinker, both tasted disgusting to me, but Husband enjoyed them very much.  We drank them in a room containing the world’s largest collection of Scotch Whisky, which was impressively large, and then were taken out to the bar.

Now please bear in mind that I just said I don’t drink.  So what better for someone like me than four more samples of whisky.

We got to taste our samples in the bar, which has wonderful views over the Edinburgh rooftops, and as I’m sure you can imagine, Husband got quite tipsy.  We hadn’t eaten anything since our breakfast croissant, and the whisky went straight to his head.  He made me drink one of them after I watered it down but it’s not for me.  We got to keep one of those glasses, which Husband now drinks his whisky out of at home, and I am very proud of us for not accidentally smashing them on the way back.  Hilariously, the tour level we bought gave us membership of the Scotch Whisky Appreciation Society, so I’ll be sure to put that on my CV.

After a quick stop at the shop to buy some Port Charlotte Islay Whisky, I manoeuvred him back to the hotel and we both had a little nap.  Shamefully, we could only managed the short walk to Nandos for dinner but I was too tired and he was too drunk to manage anywhere further away.  It was oddly quiet with only a couple of people in the restaurant.  I guess  chicken isn’t that popular in Scotland.