Whilst trying not to fall asleep in our Nandos last night, we came up with a plan for our second day.  We figured out which bus would take us to the Royal Yacht Brittainia over by the Ocean Terminal in Leith, so we walked over to the stop pretty much as soon as we got up.  Bizarrely, Ocean Terminal is a mall, and we weren’t really expecting that much from the Yacht – what other royal attraction can you get to through a mall?  After a quick breakfast in the mall, we went up to the entrance, grabbed our free audio commentary handset (take that, Edinburgh Castle) and entered the yacht at the bridge.

We then spent absolute hours wandering around this fascinating ship and I loved every freaking second.  The yacht was decommissioned in 1997 but has since been lovingly taken care of and anyone can visit – there is so much of it open to the public.  You start at the bridge and the deck, then go down through the state apartments – the Queen and Price Philip’s bedrooms, their sunroom, their drawing and living rooms – and then further into the ship where you can walk through the crew quarters.  We visited the crew bunks, their pubs, doctors/hospital rooms and the laundry.  It was amazing to visit the rooms where so much history has taken place.  You end up at the bottom of the ship in the engine room, which was sparkly clean.

Best of all, they have a really nice tea room on board.  We were there at about 11.55 so couldn’t resist the opportunity to have lunch where the royal family enjoyed buffets, so I had a caesar salad and Husband had a salmon sandwich.  We had such a great table as well, right next to the window overlooking the dock, and the service we received was impeccable.

I was very sad to leave the yacht, and would love to go back again.  And also, I want them to recommission it so I can go on a cruise.

We had a quick whirl around the shops in Ocean Terminal, tried to find Husband some new trainers and failed, and then decided to get the bus back to Princes Street for some more shops.  We did eventually find the trainers he wanted, and got talking to a really nice half-Maltese sales assistant who looked quite like Husband (who has Maltese ancestry).  They could have been brothers.  We escaped the crowds up by walking along George Street, and then decided to go back to the hotel.  We’d seen that they were offering cocktails and cupcakes in the very swish Monboddo Bar.  Who would say no to this? 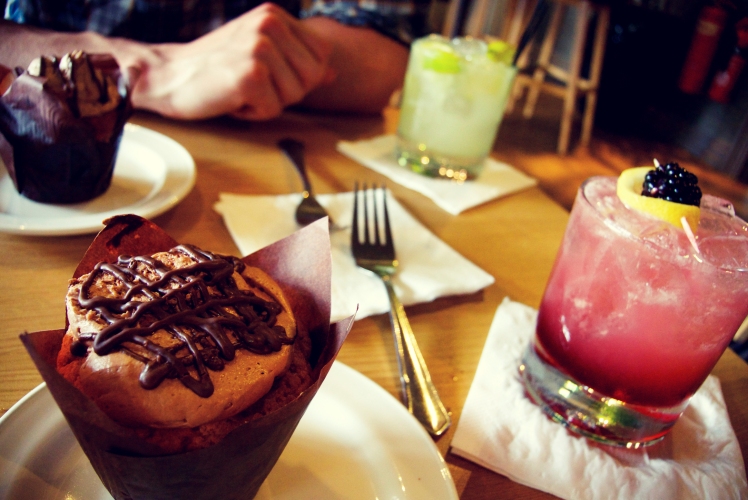 I had a Bramble, can’t remember what Husband had, mainly because I got drunk off my ass.  I am such a ridiculous lightweight.  A short nap followed, of course, and we then decided to take advantage of the other dining option in our hotel, the Bread Street Brasserie.  This was really nice, and more alcohol followed (for Husband, I’d had enough).  Again, the staff were so polite.  Nothing like the wait staff we get in London.

The next morning, we made our way back to the south.  We didn’t have much time left in Edinburgh, so after a leisurely breakfast in Bella Italia on the Royal Mile, we soaked up some sunshine in Princes Street gardens whilst listening to a bagpiper playing the Star Wars theme tune.  No really. 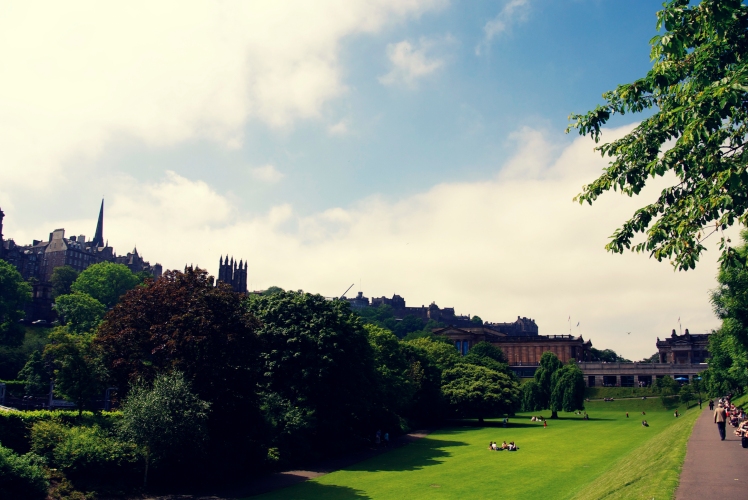 The journey home felt like it took forever, and were got stuck in Newcastle for about half an hour because of signal failure.  We got home at about 8pm, and whilst I was sad to have left Edinburgh, it was nice to be back home.