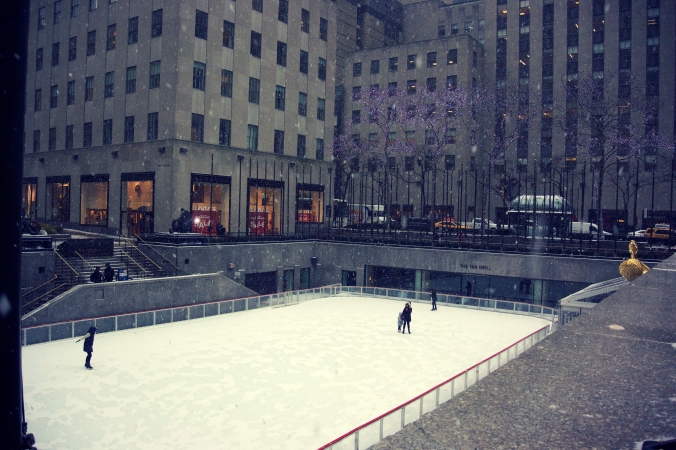 Watching the news on our third day in New York continued to terrify us.  Good Day New York (our favourite American morning show) must have mentioned the word ‘blizzard’ hundreds of times.  Flights were getting cancelled, the public was being advised to stock up on batteries and water, employees were being told to go home from work – it was serious times.  We had a quick discussion about what we going to do – should we try to get a flight out today or just wait and see?  I checked our travel insurance and was fairly certain they’d pay for extra nights if we were stranded, so we decided to sit it out.

It was snowing as we left the hotel to grab a Starbucks and was extremely brisk to say the least.  We totted up what we’d need should we be stuck in the hotel – books, magazines, snacks and water – and planned a route taking us around the vital stores.

First up – Barnes and Noble where I finally picked up the American copy of BJ Novak’s One More Thing: Stories and Other Stories (their cover is so much nicer).  Then, Uniqlo to stock up on warm weather clothes for Husband.  Sephora was on our route so I figured I may as well pick up some make up I can’t get in the UK.  The wind had died down a little, so we braved the 4 blocks to Kiehl’s in Hell’s Kitchen for some more essentials.  It was worth it, as the assistant who served us was amazing – the nicest customer service we received the whole trip.

We knew we wanted a Lenny’s Sandwich for lunch so we quickly dumped our bags back at the hotel and caught up on some news (to sum up – blizzard) and went back out to Rockefeller Plaza for a Lenwich and a chicken cheddar sandwich – so good.  We sat in the plaza, people watching and savouring our sandwiches before building ourselves up to brave the wind.  It was now snowing quite heavily, and the snow was incredibly painful as it hit our faces but we had just enough energy to visit Magnolia Bakery to pick up some blizzard supplies.  The bakery was empty – I’m not sure we would have been able to get into the store had it been an ordinary day, so thanks Blizzard!

The afternoon was spent in the hotel room alternately watching the news, looking outside the window, and eating our Magnolia cupcakes.   It was crazy intense.  Programmes were being cancelled for the news and I’ll admit that the hysteria did get to me a bit.  The hotel posted something akin to an emergency plan under the door – basically, we’d be left to fend for ourselves for a bit as they couldn’t get staff into the city.  Freaked out does not even cover it. 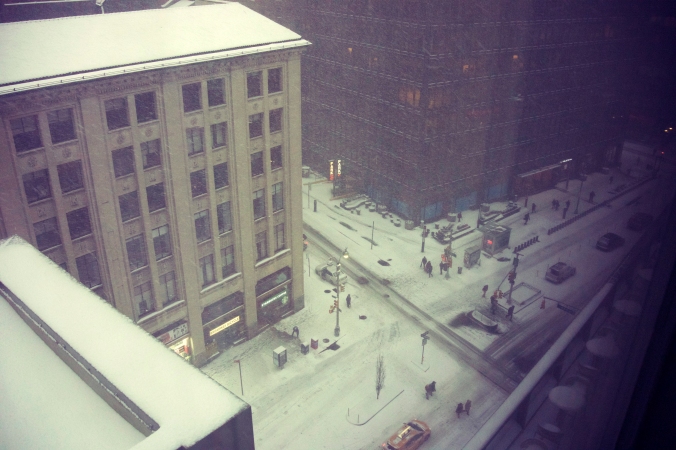 Terrible photo as the windows were dirty, but this was the view from our hotel room

Husband did his best to keep my spirits up, and at around 6 when the snow started to die down he suggested venturing out to find some food.  We could see the restaurants outside our hotel room were all closed, so we assumed we’d need to walk pretty far to find something open but we found a Wendy’s open a block away, grabbed a chicken ranch burger thing, and took it back to the hotel to eat.

The streets were empty aside from workers clearing the streets of the snow.  We watched them all evening – they were constantly circling the block to remove the snow.  It was quite astonishing.

We were sat in bed watching the Celebrity Apprentice just after 9.30 when all of a sudden, our phones started SCREECHING.  My heart leapt into my throat – mainly because both of them were on silent.

I didn’t even know my phone could do this!  All the good work Husband had done in trying to chill me out was ruined.  We went to sleep with the curtains open so that when I inevitably woke up at 5am, I’d be able to see the chaos.

5 thoughts on “I get the news I need on the weather report.”