Life was very disconnected this week in the Untold Blisses household.  Husband was away in Sweden for his first major project in his new job, which I was very jealous of.  I’ve been desperate to add another country to my Scandinavian bingo card for a while, and had plans to go with him.  Unfortunately, I was away on work as well.  In Reading.  Not quite the same as trendy Stockholm.

My colleagues and I were staying in a purpose built conference centre, which is not the photo above.  That’s the main mansion house, which was very pretty and had amazing grounds.  Our part of the hotel was around the back.  It was lovely to walk around on our lunch break though.

The conference itself was fairly full on, with barely any breaks between seminars.  I have a lot to follow up on when I’m back in the office (I’m feeling quite tired just thinking about it).  Everything was centred around  “The Street”, which had a proper Mini and some kind of BMW parked up at one end (I’m assuming that you could buy), and a Nintendo lounge at the other. 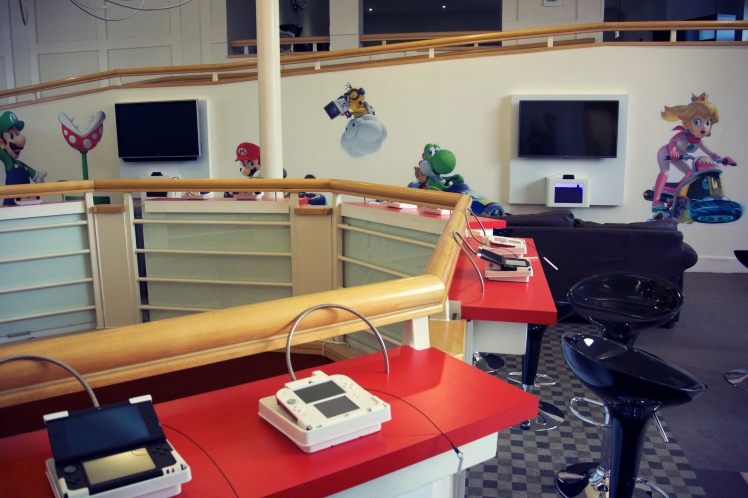 Not that we had time to play any Nintendo, but it was quite weird.

This was at the end of the first day, as everyone was getting ready for Mexican food night.  That was a fairly odd evening, with us all taking part in a Mexican-themed quiz.  At one stage, we played the Intros round with 10 Mexican songs, most of which I had never heard before.  It’s not really what you expect to do on a Wednesday night.

The three days we spent in Reading were pretty tiring, and I was pleased to get home to normalcy on Friday night.  Conference season is over for 2015 so time to put new knowledge into use.

We've just discovered the coffee machine has data
It's quite something when they sneeze on you
Went on another beautiful drive around the Trossachs National Park but didn't stop so no photos. Third image shows our route, image one and two are the adorable baby cows who finally let me pet them
Someone (me) crashed hard after their second Covid vaccine and didn't get to the supermarket for dinner. Drive to the takeaway it is!