We are currently in the middle of putting in some Pax wardrobes (well, Husband is.  I’m sat on the bed blogging) which has led to the discovery of things I’d long forgotten about, including the above box.  It was shoved right under the bed, and I don’t think I’ve thought about any of this stuff in a really long time.

I was so proud of my Mr Men floppy disks.  I don’t think I ended up using them all because half of them didn’t actually work.  I like how my serious stuff (my dissertation and script) were not on the Mr Men disks – I decided they weren’t professional enough for that.

The tapes have various ‘radio shows’ that my friends and I did at school (they’re actually stolen from school as they all have my school’s address on them…) and the one on the top, with “Chamber Music” in my Dad’s handwriting on it, is A-Ha’s first album Hunting High and Low.  My Mum copied it from a friend of hers for little-me – I was obsessed with that album.  I don’t know what the Chamber Music that was originally on it was though.  Also in the picture on the right is a roll of film with who-knows-what on it; a micro-cassette which may have interviews with film editors on it; the rose hair clips I always wore in my hair in the ’90s; and a Batman Forever blank tape which I thought would be worth a lot of money.  HA!  And thank goodness I’ve found my Blockbuster Video card. 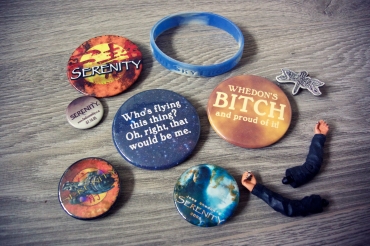 The VAST ticket is signed by Jon Crosby – I got that when I met him after the ULU gig.  The other VAST things are random stickers and a badge I collected along the way.  There’s also a Patrick Wolf ticket and badge, a Rammstein badge, and a HMV wristband for a signing.  Really can’t remember who though – maybe Gary Numan?

And then various Whedon badges – did I buy these or were they given to me?  And the classic Browncoat wristband.  The arms are Angelus’s – I have an Angelus figure somewhere in the house who has interchangeable arms, but I preferred the ones where he’s holding stakes.  God, what a nerd.