It hasn’t been the greatest week.  Not only are we stuck with a Conservative government for the next 5 years, but The Mindy Project AND Revenge have been cancelled.  At this point, I can’t decide what’s worse.

Fortunately, Friday brought the fun back with a trip to the National Theatre for Tim’s birthday (shout out for Ryan’s birthday too!).  The NT release a certain amount of £20 tickets each week for their Friday Rush promotion and Tim had managed to snag tickets for Everyman.  Pretty damn awesome tickets as it goes, right on the front row round at the side.  It felt like we were on the stage.

Everyman is based on a 15th century morality play, adapted for the stage by Poet Laureate Carol Ann Duffy.  I hadn’t read anything about it beforehand (other than on the NT website) so had no idea what to expect.  I didn’t even know it was written in rhyming verse.  Judging from the opening scene – God as a cleaner sweeping the empty stage, quietly telling us we’re all so beautiful – I assumed it would be a very pared-back production about a man trying to escape Death.

And then Chiwetel Ejiofor falls from the ceiling in slow motion.  It soon becomes clear that this play was going to assault my senses in an incredibly overpowering way.  A hedonistic birthday party follows for Everyman, and it was nice to have the whole cast singing “happy f***ing birthday” for Tim (OK, so it wasn’t for Tim, but we accepted it anyway).  After everyone goes home, Death turns up – Father Liam from Father Ted dressed in a beanie hat and white plastic suit – and stalks Everyman who turns to his friends, his family, consumerism; desperately grasping for something to barter with.

The music and visuals were something else, and I love how cinematic it was.  As we were sat to the side, we did miss a little of the impact of the choreographed sequences with synchronised drug-snorting and selfie-taking but it did look amazing.  I’d love to see it again dead centre.

Chiwetel wasn’t just acting, he was Acting.  With a capital A and in italics.  The sweat poured off him, and by the time he reached his final words, the sudden realisation that he has a soul, I was in tears (naturally).  Not to diminish the talent of the rest of the cast, but this was Chiwetel’s play and his performance was supremely engaging and relatable.

Not only did we have the incredible visual of Chiwetal falling, there was also UV masks, an industrial fan (waking up the old man next to us), rain, bubbles, glitter, a dancing wall of rubbish.  It really is difficult to explain other than using words likes contemporary, frantic, and ever so slightly pretentious (in a good way). 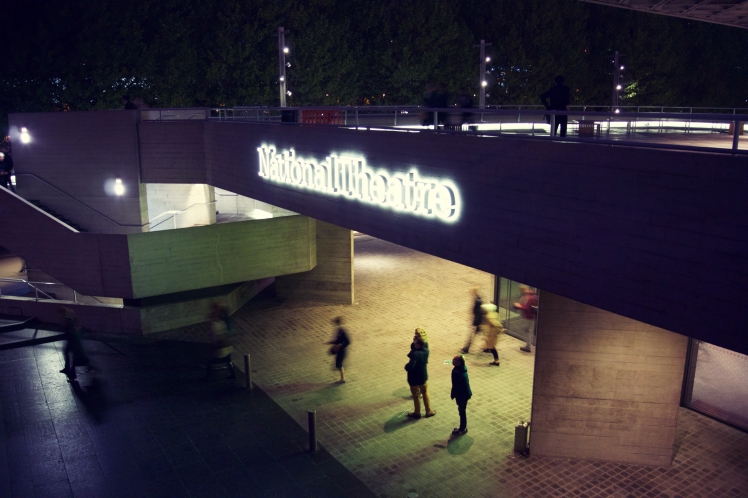 3 thoughts on “I Think I Have a Soul”