I like afternoon tea.  Whoever invented it is a genius (apparently, Anna, the 7th Duchess of Bedford.  Give that woman a medal).  I’m always looking for the next good reason to book a table, and it just so happens that we had a good reason this weekend, so decided to venture into Berkshire.  The Vineyard is a beautiful hotel, restaurant, and spa just outside Newbury that just so happens to do a very sophisticated afternoon tea.

The very first thing we saw was a Ferrari in the car park.  It felt like our car was pretty much one of the cheapest in the car park, and we’ve got an Audi, so I was very glad that I’d worn a nice dress.  We were greeted outside by member of staff (he seemed to appear from nowhere) and he led us to the restaurant – a very nice touch and a great indicator of the customer service we’d receive that afternoon.  I took a photo of their wine collection displayed in reception as we waited – it’s not a great photo but shows the stunning set up that you see as soon as you walk in for some of their 30,000 bottles.  The glass floor reveals even more shelves of wine, and is only just a teensy bit terrifying to stand on.

Anyway, enough of the wine as we weren’t here for that.  We were shown to the lounge and seated at a comfy sofa in front of the fireplace.  It was a beautiful sunny day outside so the doors had been flung open, but I imagine it’d be lovely to snuggle up here on a cold day.

Tea was poured, and sandwiches and scones were brought out.  I had chosen the vegetarian (which admittedly wasn’t a particularly varied selection, but that’s ok).  The scones were bloody amazing though, with homemade jams and yummy cream. 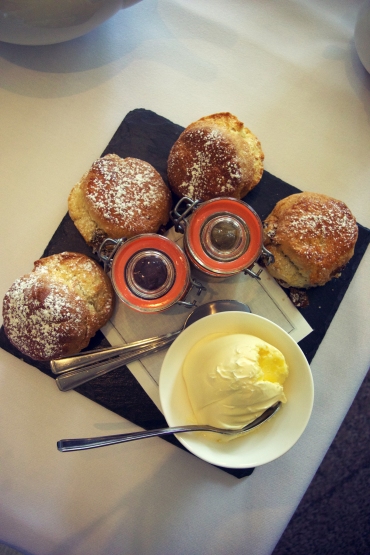 I had seen a photo of the cakes online, but that didn’t really do them justice.  I’d gone for a walk in the garden to look at the fountain after eating my scones.  It looks like it’d be awesome to sit around in the evening as is has fire torches on the surface.  I came back to this at the table: 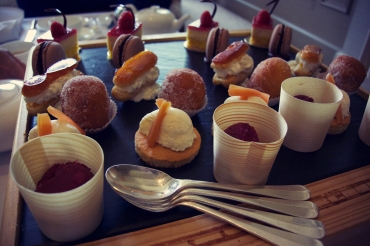 Wow.  I’d missed the description of what they were, so only using my terrible sense of taste – left to right was blackcurrant sorbet, a biscuit thing with ice cream on it (such detail), lemon doughnuts (which were so good), caramel eclairs, chocolate macarons, and some kind of raspberry entremet.  It was a great selection and made up for the slightly lacking sandwiches.  We massacred the cake display, and probably the toughest decision was the order in which to eat them.

It was such a pleasant and laid back afternoon, and we spent about two hours there in total.  I visited the bathroom of course (well, you have to at fancy places, right?) which was down an art-lined corridor – some really lovely paintings and drawings.  The bathroom was so quaint; fabric covered walls, REN hand-wash, and a sewing set for any clothing mishaps.  Plus, it smelt heavenly.

It was just such a shame to have to go home.

3 thoughts on “There’s sugar on your soul”