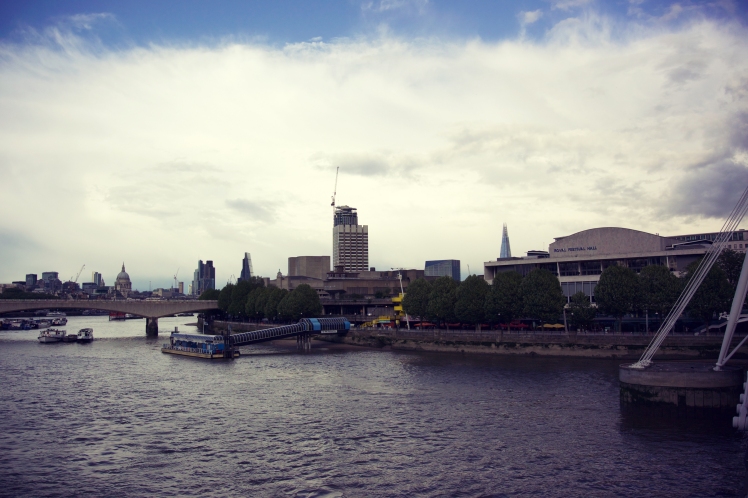 A couple of months ago, I was browsing through the Jonathan Groff tag on Tumblr (as one does) and read a reference to a musical he’d just been cast at the Royal Festival Hall.  GROFF IN LONDON!  This was an opportunity too good to miss.  I’ve seen him once before in Death Trap, but there was no singing in that, and my miniature crush on him has only developed tenfold since then, what with me recently binge-watching HBO’s Looking.

I didn’t know much about the musical, other than it being about a window cleaner who decides he wants to… well, succeed in business.  Based on a 1952 book, followed by performances on Broadway and the West End, and a film in the late sixties, the play was reborn a few times with Matthew Broderick, Daniel Radcliffe, Darren Criss, and a Jonas brother, in the lead role – J. Pierrepont Finch, or Ponty.

This was a one night only kind-of-a-deal – I’ve seen this referred to as a concert musical – something which surprised Husband as he assumed that it was part of a longer run.  Nope – just Tuesday night.  I’d managed to get fairly good seats, which was only marred for me by the guy in front who seemed to have a broken neck.  It’s the only was to explain the constant moving of his head from side to side.  But broken neck guy aside, we had full view of the stage, which was set out like a radio play – Royal Philharmonic Concert Orchestra at the back conducted by Mike Dixon, and a series of old fashioned microphones at the front for the performers, foley artists at the side.  It made for a really interesting and unique experience.

Ponty belonged to Jonathan for the night, and it really felt like the role was made for him.  Which does come across as quite bitchy seeing as Ponty is quite manipulative and calculating, but there is a wonderful innocence to him as well.  He had an amazing relationship with the audience, frequently conspiring with us – it was ridiculously cute.  During the song “Rosemary”, where he suddenly realises there’s music in the sound of his loved one’s name, he gets a little wave from the conductor – the breaking of the fourth wall was so fun.

The aforementioned Rosemary was played by Cynthia Erivo who was stunning.  Her voice was just something else – it really brought a modernity and youthful edge to the 1960s play.  I’d love to see her again.  Everyone in the audience routed for Rosemary and Ponty, and the cheers when they finally kissed just made them kiss for longer – Jonathan and Cynthia had such great chemistry.

Another standout player was Hannah Waddingham who was laugh-out-loud funny as Hedy LaRue, a nickname I shall give to very many people from now on.  I was surprised how funny the musical was, and although it’s set in a very different era (an era where it’s necessary to sing “A secretary is not a toy”), there were still a lot of very relatable themes.  It had a very Mad Men quality, so it was quite apt that the play was on a few days after the series finale.

The only downside to the performance was the sound – ever so occasionally, the orchestra overwhelmed the singing and it was a bit hard to make out some of the words, but that really is quite nit-picky.  It was just such a treat to hear some live Groff singing.

Part of me is sad that there isn’t a longer run as I’d love to see it again.  But the other part is pleased, as it makes the one night very special for the people that saw it.