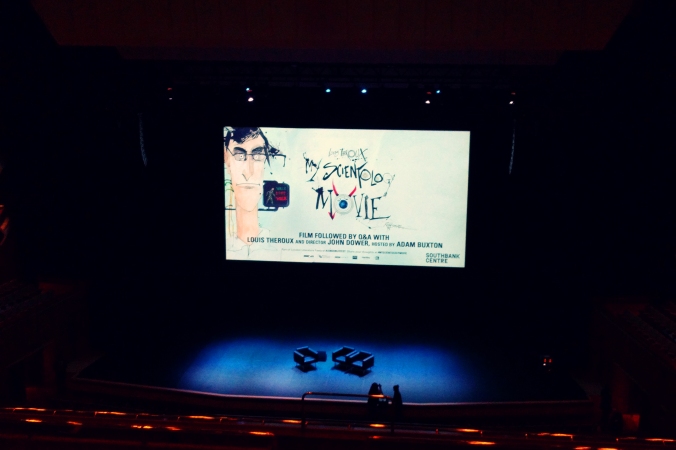 About a year ago, I was stood next to a red carpet, repeating the phrase “it’s a documentary about Scientology” to disinterested tourists who smiled, nodded, and drifted away.  I don’t routinely visit red carpets, but had accompanied Husband and Tim who had tickets to the premiere of Louis Theroux’s My Scientology Movie.  I did not.

I had lingered after they’d gone in, hoping to get the chance to speak to Louis.  He chatted to the press for a bit before briefly talking to fans who forced themselves upon him, but it wasn’t to be for me.  If you look at the photos from the London premiere, you’ll be able to spot me looking glum in the background, trying to decide if I had time to stop by Tatty Devine on my sad walk back to Waterloo.

Things have now come full circle, with me attending a screening of the film in the Royal Festival Hall alone, without my two compadres.  Circumstances conspired against me, as both Husband and Tim had more exciting things going on, but I couldn’t give up the chance to see the film, plus a Q&A with Louis and director John Dower hosted by Untold Blisses favourite, Adam Buxton.

I had low expectations of the film – I’d read a number of reviews which pointed out that the film doesn’t really add anything to the conversation – but I actually really enjoyed it.  I’m fascinated by the craziness in the Scientology cult, and have adored Louis since his very first Weird Weekends so I couldn’t not enjoy it.  It did feel different to his other documentaries, and the feature-length aspect of it meant that some parts of the story came across as a bit labourious but it there were still brilliant moments to be found.

And some moments were downright disturbing, like the joy Marty Rathbun seemed to get out of roleplaying with “David Miscavige”, and the stalking that the ‘church’ does of Louis and his crew.  It is a fascinating examination of how closed-off they are – I think Louis more than anyone would be willing to show balance but they clearly don’t want to engage with an audience.  It’s a clever perspective for Louis to have – this was just a film about how he couldn’t make a film.

Adam Buxton leading the Q&A at the end was a delight.  The closeness of his friendship with Louis allowed him to be more candid and less scripted, even at one point accidentally comparing Louis to Miscavige and Jimmy Saville.  It was a hilariously awkward moment.

I was a bit disappointed that there were no Scientologist outbursts – I had read reports of that happening in earlier screenings, and I was kind of tempted to meet one (I have knowingly met one – Jason Dohring who has the most intense eyes I have ever seen in my life).  There was a really odd moment at one stage where a whole host of men in white shirts traipsed out all at the same time which freaked me out a little, but it could have been just a coincidence.  I was a tad on edge after that.

Next up – the documentary they told Louis they were making about him.  Can’t wait for that to be released.