I was not a very worldly teenager.  I hadn’t travelled, wasn’t too hot on pop culture or current events, tended to watch whatever my parents watched on TV.  You could almost say a bit sheltered.   So when I saw Adam Buxton dressed as a Klingon singing a terrible song about Star Trek: The Next Generation, I had no idea what to think.  It was so weird to watch intentionally bad TV – Takeover TV was my first real experience of subversive media and I loved it.

Over the years, I became obsessed with the Adam and Joe Show, and their various stints on radio.  So much of their 6 Music show has become ingrained in my life – there are certain links which made me laugh so much that I can picture where I was when I heard them the first time, like squirrelling away in the old filing cabinets at work, or stuck in traffic in Guildford.

We’ve seen Adam Buxton a bunch of times over the past few years (as documented on the blog), including a visit to BUG last week which I haven’t blogged about as yet.  But Joe has always been just out of reach for me – despite the fact he’s done plenty of filmic events over the years, I’ve never seen him (except in Forbidden Planet about 12 years ago.  He was buying comics.  I was giddy).

Adam and Joe together though?  I thought it an impossible dream.  I could never imagined that I’d go to a live recording of a podcast, and one that celebrated 20 years of their professional partnership.  But it actually happened, and I had a hysteria-caused sore throat to prove it. 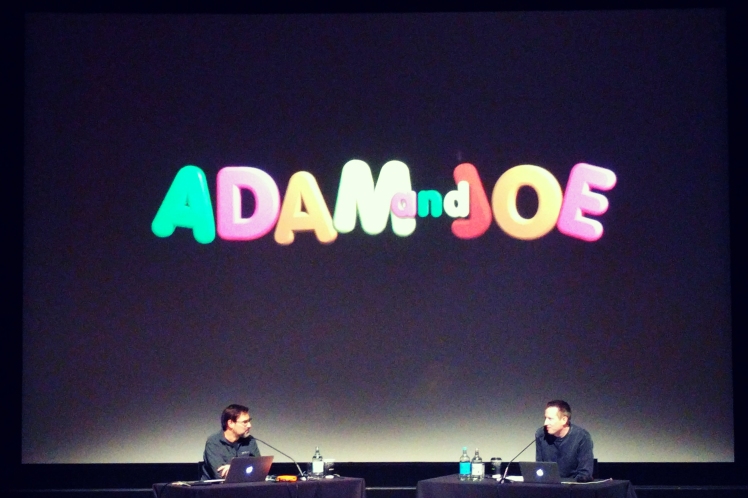 There were two shows on Thursday night, and I am very grateful to Tim for getting us tickets for the first (although if there wasn’t such a thing as a last train home, I would have tried to go to both).  It overran by quite an extensive amount which I’m torn about – the audience was privy to some naturally hilarious conversation between the two of them, but when Adam skipped us ahead in his slideshow to get to the end, we saw how much we’d missed out on.  Hopefully, the podcast will feature enough of the bits we missed.

We did get to see some very nostalgic clips though – like People Place which was brilliantly bonkers – and some amazing animations made for the evening, including this one which was filled with in-jokes and my favourite from the night:

Whilst it took Joe a few minutes to get comfortable in front of the sold-out crowd, they were both on excellent form and got adorable giggles at Joe’s mime act and Adam’s impression of the Queen.  I similarly got the giggles, and by the end of the evening, I had cried the make-up off my face.

Plus, I got an Adam and Joe tote bag, which is something I never thought I’d own.  The teen version of me would be incredibly jealous.