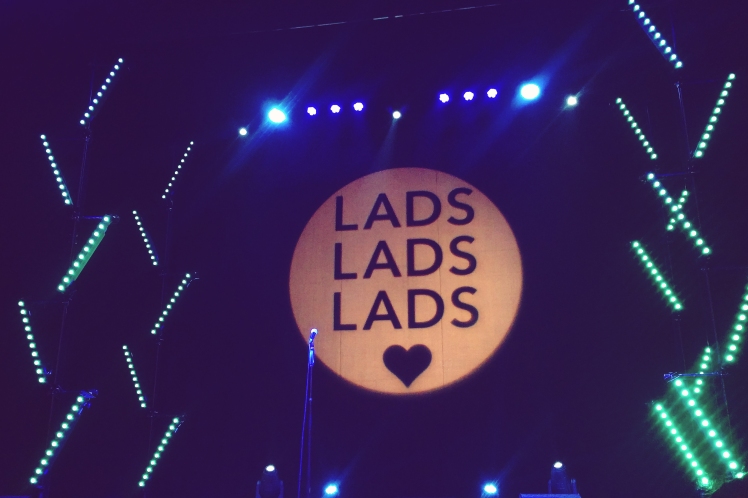 On Friday, I dragged myself out of my self-imposed winter hibernation for a trip into London.  On the agenda – dinner, Sara Pascoe at the Wyndhams Theatre, and light installations.

This is the third time I’ve seen Sara, and further continuation of realising how much I identify with her which I first realised after seeing her in 2016.  Admittedly there was slightly less for me to hook into in LadsLadsLads as the show started with the break-up of her last relationship but there was still plenty of “THAT’S ME!” moments even down to her pre-gig/interval music which was basically my Spotify playlist).

There was such an intimacy to her show which I can imagine some people would feel uncomfortable with, and there was certainly some awkward laughter from some of the audience.  At one point, she said there was only two reasons to stand up in front of people – if you make them laugh, that’s comedy but if you don’t, it’s a TED talk but I really felt like Sara’s show was both – when she wasn’t offering funny insights, she was giving us thoughtful comments, all interwoven into a story with multiple call backs.  I adore a comedian that gives me a fully-fleshed story alongside the giggles.

I also want to commend her spectacular heckler management.  I despise idiots who make unsolicited noises in gigs whether positive or negative, and I cringed every time this idiot woman whooped.  It’s so selfish and I will never understand it.  Sara has perfected the art of a perfect withering look though.

An interesting angle for me (and probably loads of others as well), is that I’ll be hearing the other side of the break-up when I see her ex-boyfriend in a couple of weeks.  Based on the fact that I almost cried on a number of occasions in Sara’s set, I’m already preparing myself emotionally for that.

After the show, Tim and I searched out some light installations from Lumiere London.  I’ve missed it on previous years, and only saw a small bit of this year but it’s better than nothing!  We down the South Bank and saw OSC-L, Light on Their Feet, and possibly others too but my favourite was Vertigo by Danish Company The Wave.

I didn’t have my camera on me so all my shots are appalling, but I loved walking through the triangular tunnel.  It’s a real shame Lumiere is only on for the weekend as it would have been great to see it in daylight as well.

One thought on “Sara Pascoe – LadsLadsLads”

Day off lunch treat
When you work in data, but you're also an idiot who can't figure out how to fit all your annual leave in before your end date
Forgot to post this yesterday - good to see the snow back. IN MAY
It's almost 10pm!