My weekend started on the Friday night with a classic date night – theatre followed by dinner.  Husband bought some last minute tickets to Mood Music at the Old Vic and he managed to get us pretty good seats.  All the better for me as the play featured one of my teenage crushes, Ben Chaplin.  I was obsessed with the sitcom Game On at the age of 15, and Ben was quite a large part of my obsession.  I lost track of him over the years, so was great to catch up with him in one of my favourite theatre venues.

The play itself was interesting, although it did leave me wanting more.  For a story about music, there was surprisingly minimal actual music.  It did feel very ‘placed’ and choreographed – everyone had to stick to set movements around the stage so at times, it came across as  a little forced.

Very much enjoyed it though, and it was nice to do something different on a Friday night.  We then had a late dinner and checked into a the Hilton Bankside so we didn’t have to rush for the last train home.  We’ll definitely be doing that again.

Saturday morning came – we checked out of the hotel, had a leisurely coffee, and I made my way over to the Mercato Metropolitano for my third Crafty Fox (Husband spent the day shopping for a new holiday outfit).  I love this venue and I wish I had more of a reason to visit!

I met up with a fellow Crafty Fox aficionado (my friend Alana) and we wandered the stalls whilst gossiping and analysing our shared love of Matthew Rhys.  I didn’t spend a great deal of money this time, but managed to get myself some more Rosa Pietsch necklaces, and a very cute glittery bow from Pup Tart.  I have no idea what I’m going to do with it, but I couldn’t leave it behind. 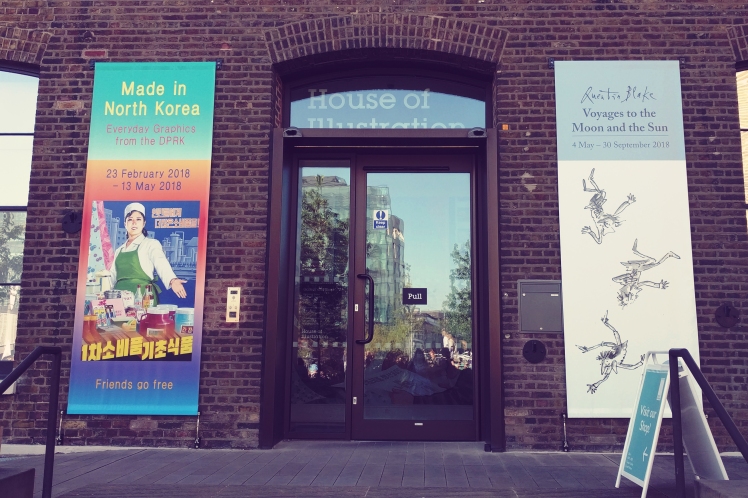 I then collected Husband from his shopping spree to meet up with Tim for some Saturday afternoon art appreciation.  We went to the House of Illustration in Kings Cross – a small but perfectly formed space which was showing three exhibitions.  We were there to see Made in North Korea which was fascinating (but we had a quick look at the other exhibitions too, including Quentin Blake).  We were there to see the North Korean ‘found objects’ though, and it’s honestly something I have never seen before.  I just don’t understand how he manages to have so much of this stuff!

A catch-up over Ruby Violet ice cream followed (although it was more me grilling Tim on the exact details of his recent trip to New York) and then dinner at Caravan.  Kings Cross has changed a lot since I was there last!

And we were home in time for an episode of Riverdale.  What a perfect start to my Bank Holiday.