Back in November, I noticed that the prices in the Virgin Atlantic Black Friday sale were good.  Crazy good.  So good that I found myself unable to say no, so booked a little trip to New York for the bit between Christmas and New Year. We initially wanted to go from the 27th to 30th December, allowing us to be back home in plenty of time to go back to work, but we left booking just a smidge too long so the dates we wanted sold out.  Always a good lesson – if you see flights you like, snap them up.

We ended up with 28th to 31st December instead, which meant we’d be flying back home on New Year’s Eve.  It also meant that the return flight was with Delta – not ideal, but we were still able to use the Virgin Atlantic Clubhouse at JFK so it wasn’t all bad. Both planes were A330s.

We flew out on VS3, departing Heathrow at 8.50.  We don’t live that far from the airport but I still made Husband get up stupidly early so we could get to the Clubhouse as it opened.  I’d be damned if I wasn’t going to get myself a spa appointment this time (like last time where I was left sorely disappointed).  I manoeuvred a sleepy Husband through an empty Upper Class security lane (praise the lord!) and we made it to the lounge about 10 minutes after it opened.  It was so peaceful and empty – I could only see 8 passengers including us – so that spa appointment was mine.  Husband managed to get himself booked in for a haircut as well.  I paid for a manicure which actually wasn’t that great because the product they use is appalling but to their credit, they have now refunded me.  Still enjoyable even if it did start to chip the following day.

We sauntered down to the gate at about 8am – gate 22 again, which is a pain in the neck to get to as it’s pretty much 15 miles away from everything.  I always seem to get gate 22.  Upper had just started boarding, so we walked straight onto the plane and got settled in.  We had the usual reverse herringbone seats with 1-1-1 configuration, and we had picked 3A and 4A so were facing the back of the middle row.  I’ve read a lot about how people hate the reverse herringbone, but I still enjoy the seat.  This one seemed fairly well maintained, with all the buttons still shiny and new.  I got a purple Herschel amenity kit this time which pleased me greatly (I love purple).

We were served lunch at about 10.30 which felt way too early to be eating a three course meal.  I had the soup which was delicious, followed by the chicken but I skipped dessert as I wanted to get some sleep. 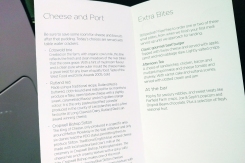 The last time I few Upper Class and tried to sleep, I could not get comfortable. This time was much better and I slept for hours, only waking up when we hit a lot of turbulence and just in time for afternoon tea.

I was a little confused as I thought this was supposed to be the big fancy afternoon tea by Eric Lanlard, so was a little underwhelmed when this arrived on my tray.  This wasn’t quite what I was expecting, tasty though.

We landed at JFK at little earlier than schedule, but were then stuck on the plane for 30 minutes as they couldn’t get the air bridge to work.  The ground crew moved it to the front, moved it to the middle, moved it back to the front repeatedly for about half an hour.  The captain asked all the passengers to sit back down as he had no idea how long it would take, and at one stage, they were talking about getting old fashioned steps up to the door.  They managed to get it working eventually, and once again having Global Entry got us through immigration quick as a flash.

On the way back, we left Manhattan a little earlier than planned as it had just started raining so we thought we’d head to the Clubhouse rather than find something to do.  We checked in at the Delta One check in area with a classic grumpy Delta member of staff (all Delta staff seem grumpy), and she advised us where the Sky Club was.  Ha, as if we’d go there when the Virgin Atlantic Clubhouse was available to us.

I love the JFK lounge.  It’s so quiet, the showers are amazing, and the staff are generally excellent.  The ability to have a shower and get changed into clean clothes is my favourite thing about using the lounges.  They still have Bumble and Bumble hair products in the showers even though they seem to have got rid of the hair salon from the spa. I had been looking forward to a hair treatment this time round, but had a wonderful 15 minute facial instead. I wish I’d paid for a longer one.

There was one bit of irritation – they’ve put in this god-awful “B8ta” pop-up, and the staff seemed more interested in chatting with the B8ta staff than checking on customers.  We weren’t as looked after as we were in London.

The Delta flight itself was pretty much the same as our Atlanta experience.  The seats were a little old but still comfortable, the staff were welcoming, and I got hammered on two cocktails (I really should know my limits).  It did get incredibly and uncomfortably hot in the middle of the trip, but other than that, fairly uneventful.  Well, after the fun of take-off

This was our New Year’s Eve flight and we were greeted by flight attendants wearing 2019 glasses.  I thought that might be the limit of their celebrations – we were leaving at 7pm EST so I couldn’t figure out when our midnight would be.  One of the staff explained that they shift to London time as soon as the flight starts, so we would be leaving New York directly at midnight GMT.  We started taxiing at about 6.55, and five minutes later, the flight attendants ran through the aisles with party blowers screaming “Happy New Year!” before running back to their seat for take-off.  It was actually wonderful – I had a tear in my eye.  That might have been down to the cocktails however.

We landed in Heathrow earlier than scheduled, managed to get through immigration really quickly, and our bags were the first off the plane so we decided to visit the Virgin Atlantic Revivals Lounge for the first time.  It’s a small lounge but there was plenty of free seats when we got there, with a spa and showers.  If I was going directly to work, this would have been a godsend.  As it was, we were only half an hour from home so we just had a bit of breakfast which was served in no time at all – we only spent about 45 minutes in the lounge in total but it was just what I needed as I hadn’t had any breakfast on the plane.  The spa was tempting, but my bed was calling.

One thought on “Flying on New Year’s Eve”