I’m still a bit emotionally raw from seeing Before Midnight last night.  I persuaded my esteemed colleague to take a trip to the Everyman on Baker Street, because of course it wasn’t showing anywhere near me.  I live in the country!  People in the country don’t like film.  OK, I’ll get off my soapbox now.

I adore Everyman Cinemas.  I’ve been to the Winchester and Walton-on-Thames screens (see – country bumpkin!) and they were both the perfect mix of quirky and retro without being awkwardly uncomfortable, and Baker Street was no different.  There was a lovely bit of Neon in the stairwell and we all know how much I like a lovely bit of Neon.  The bar was gorgeous, with plenty of places to sit and wait for your film to begin.  Just two screens, but the two screens happen to be playing my two favourite films of the year (Before Midnight and Behind the Candelabra) so it felt like this was a cinema just for me.  The screening room was the perfect size, with an unusually asymmetric layout – a row of 5 seats on the left, 2 seats on the right.  The two-er would be perfect for a date, but unfortunately for Tim, he just had a sobbing mess sat next to him (me).  And I don’t normally notice the clarity of cinema screens, but this one seemed really good quality – like super mega HD or something. 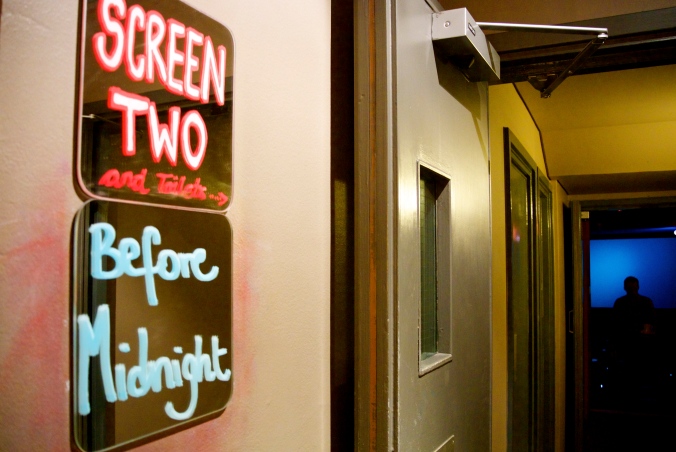 I’ll leave the proper film review to the professionals, but I will just say this film really got to me.  I can’t remember when or why I bought the first two films (I think it was when Before Sunset came out, so nine years ago?) but Jesse and Celine are such fully formed characters, that they feel like real people I know.  I think that’s why their story has captivated me from that first moment on the train 18 years ago.  Their problems aren’t unique – millons of people struggle with the same issues and I think it will be uncomfortably close to home for some.  I don’t have children, and am planning on remaining childfree, but I still was able to identify with Celine (even though she was the mayor of Crazytown at some points).  She only gets time to think on the toilet, so now she associates thoughts with the stench of shit.  One of her biggest fears is that she’ll end up with a man who just wants to domesticate her.  She seems obsessed with the thought that if Jesse met her now, he wouldn’t find her attractive.

I consider myself quite lucky with my lot in life – Husband and I have managed to keep up our connection to each other and still regularly have long bouts of talking nonsense.  Admittedly, we do have some evenings where we’re both so tired after work that we just sit glued to various screens (laptop, TV, DS) so perhaps Before Midnight could be a bit of a cautionary tale for me.

I cried at many points in the film, and began to regret putting eyeliner on pretty much as soon as the title appeared on screen.  These are two people I haven’t seen for nine years – I didn’t realise how much I’d missed them until I saw them both again, talking solidly for about fifteen minutes in the second scene of the film.  It felt weird to have other characters feature to heavily compared to the first two films, but Ariadni’s (AKA the Greek Judi Dench) speech about her husband broke me good and proper.

I can’t wait to see it again, but I will settle for trying to watch Before Sunrise and Before Sunset this weekend.  And I’ll try not to cry again.

I feel you, Penguin