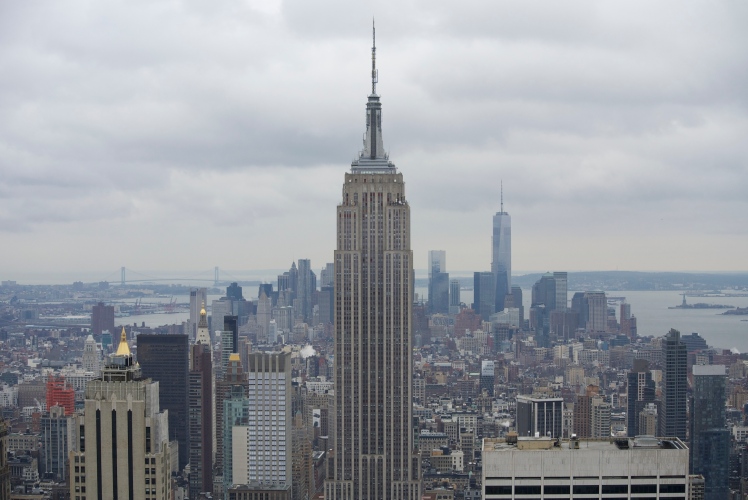 Our last morning – boo!  We had a lazy start, as we knew we wanted to get to the Top of the Rock by about 11, so we messed about with the suitcase for a bit, double and triple checked that we hadn’t forgotten anything, and checked out.  Our final breakfast was at the Starbucks on the Rockefeller concourse and we sat watching the cute little zamboni prepare the ice rink for the day.

There weren’t any queues up to the Observation Deck at all.  In the first lift, there were 6 of us, but no one told us where to get out, so we ended up going back down again.  The guy at the bottom kind of looked at us oddly before saying “y’all need to get out on the 2nd floor”.  Well you should have told us that!

2nd floor was airport style security (although a heck of a lot faster than the airport), and we then took the long winding walk around the barriers to get to the next lift.  On the walls were posters telling you about the history of the place which would give you something to do if you were queuing, but as we didn’t, we read none of it.  Take that!  The glass ceiling lift to the top shot up quite quickly – I didn’t really understand the theming of the lift as they seemed to be suggesting it was taking you through time.  Um, ok.

But then we were at the top and got amazing views like the photo at the top of my post.  We spent about an hour at the top – it was mostly grey although we could see some blue skies in the distance, and it did try to rain at one point, but it was quite pleasant up there.  I think the weather had put most people off so it wasn’t crowded at all and we had plenty of space to mess about with lenses and get some good shots.

Back on the ground, we quickly stopped by the NHL store to get a birthday present for my brother, and then I decided we’d go back down to the West Village to get some ice cream.  Not just any ice cream though – amazing ice cream from the Big Gay Ice Cream Shop.  It is possibly the best ice cream I’ve ever had in my entire life.  I had Salty Pimp (vanilla ice cream, dulce de leche, sea salt and, chocolate dip) and Husband had American Globs (vanilla ice cream, pretzels, sea salt, and chocolate dip).  I also bought myself a tote bag which we very quickly put the NHL bag into. 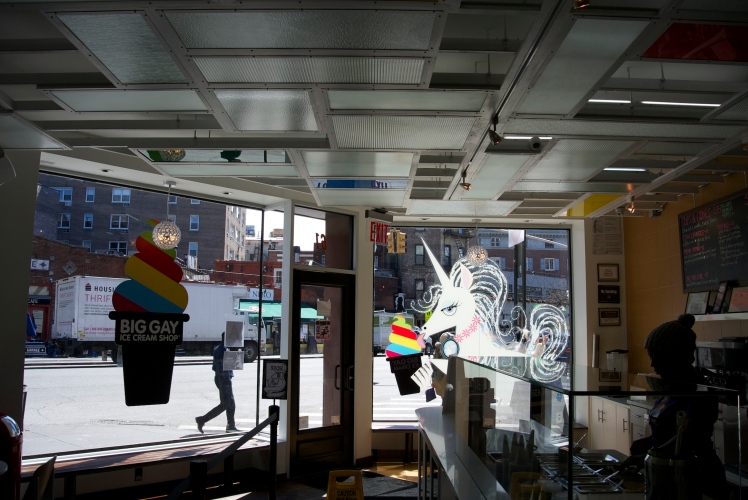 Annoyingly, as soon as we got out of the subway at Christopher Street, we were hit by beautiful blue skies and cursed the weather for not being like this when we were at the top of the Rockefeller Center, but to take advantage of this, we got back on the subway and went back uptown to 81st Street to walk through Central Park.  We walked the 30 blocks to our hotel down the west side of the park, and it was lovely aside from the students everywhere.

We got back to the hotel at about 2, grabbed our bags from the bellhop and started on our subway trip back to the air train.  The bellhop had offered to call a car for us, and I was briefly tempted but as soon as he uttered the words $70, I scoffed.  It’d cost $7.50 on public transport!

The E train felt like a long journey and we had to stand for the first half, but eventually we got to the air train.  The station there was a bit skeezy, so we didn’t hang around for too long and we soon found ourselves at Terminal 4, which is ridiculously spacious.  Security was a nightmare and so hot and busy and I couldn’t wait to get down into the shops and restaurants so I could rest my throbbing feet.

And it was passed security that I finally met my main goal of this trip – eating a Shake Shack in New York.  Down by gate 36 (which was very close to our actual gate), there were no queues, free tables, and I finally got MY BURGER! 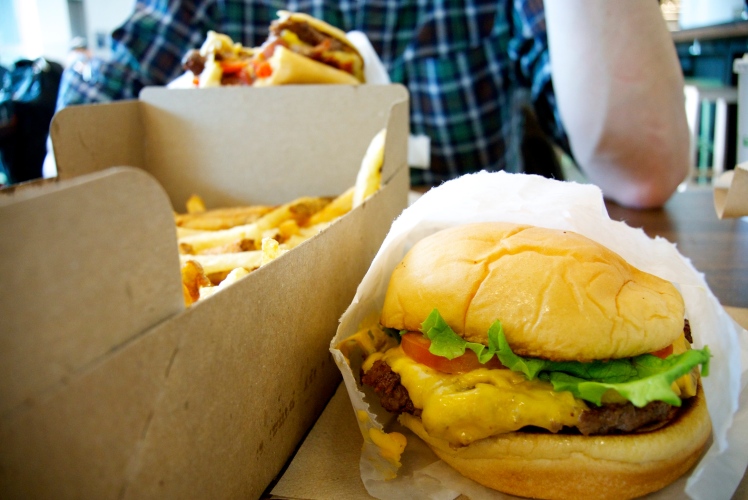 The service was a bit crap but I didn’t care – the burger was bloody lovely, as were the fries.  Husband wandered about the terminal a bit later and said the queue was massive, so I’m pleased we went there when we did.  We then found a space by a big window overlooking our plane and settled down to wait.  I did have some change left which I wanted to get rid of, and realised I had enough for a blueberry muffin and a double dark choclate cupcake from Cake Tin – nom.  I ended up leaving NY with only one dollar coin.

Everyone managed to board the plane quite quickly so there was no hanging about.  We taxied just as the sun was setting and gave us the most amazing view of New York.  AS WE WERE LEAVING.

We were so annoyed – if only we had stayed one night more, we would have seen this.  Ack!  In a bid to get over it, I watched six solid episodes of Brooklyn 99 whilst eating another Delta chicken salad – still with fruit.  I then watched Frozen (didn’t get it) and slept through Catching Fire, waking every now and again to see Katniss running about.  And then our flight was pretty much over.  We had the usual hold pattern at Heathrow for about 45 minutes so we just circled the sky above London.  When we were let free from the plane, we almost ran to Immigration as we’ve been caught in massive queues at Terminal 4 before but there was no one there and we were the first in line for the scanning machine.  YES!  Being the slightly cynical person that I am, I assumed the wait was still to come at baggage claim, but our bag was second off the plane.  YES!

We did have to wait for the bus for the car park, but overall, I think this was the quickest we have ever left Heathrow.  We were home and eating pancakes in no time, and I tried to get myself back on UK time – it was back to work tomorrow.

3 thoughts on “New York: Day five – Blue sky, just not where it counts”