This is the third time I have seen my two favourite Adam’s in a very short space of time – the first was during a comedy season at the Union Chapel, the second at the Bush of the Shepherds, and the past week at two separate, but equally funny gigs. Adam Buxton was doing a five night run of Kernel Panic at the Duchess Theatre, and we were lucky enough to get third row tickets for his final night – although it did feel as though Adam directed quite a lot of the comedy at us because we were so close.  The description on the Invisible Dot page says it best:

Adam Buxton looks within the soul of his laptop and considers how we present ourselves in the net age (he shows stuff he’s made and reads out web comments).

Which admittedly doesn’t sound that funny but I spent most of it in phenomenal pain with tears rolling down my face. Because I was laughing.  Just to be clear. He opened with the classic Moby, Moby, Moby, Moby, Michael Stipe video which I desperately want as a ringtone, but I know it would only make me giggle hysterically every time my phone rang.  His then showed us around the contents of his laptop, quickly deleting things he’d ‘accidentally’ left on there (like erotic dreams about Joe Cornish), and giving us a glimpse into his home life with adorable video projects that he’d attempted with his children. His subtitling of The Bridge‘s opening credits was amazing, and I cannot wait for him to upload that.  Blaming everything bad on UKIP also tickled me, with Adam occasionally crying out “Jesus Christ, Nigel Farage!”. It was an absolute treat to see Adam and his bright blue shoes, and I felt really sad when the hour was over as I could quite happily have sat there for another hour more listening to his demented TED talk. The bonus for me was seeing CELEBRITIES leaving the theatre at the end, including Jonathan Ross, Jane Goldman, Sophie Ellis-Bexter, Richard Jones from the Feeling, and Johnny Borrell from Razorlight.  I don’t ever spot famous people when I’m in London so this made my night!

Slightly lighter on the famous people but no less exciting was last Friday’s trip to the BBC Radio Theatre for a recording of The Guns of Adam Riches.  I had been to a recording for one episode of the first season, and hearing Tim‘s hoots of laughter on the second episode is part of the reason why I find it so fun to listen to.  I’m expecting to hear many more hoots for the second episode of season 2 as well, because we were in hysterics at the mishaps of Lord Sean of Bean. We had the audience participation that we’ve grown to love and fear in equal amounts, the brilliant array of surreal pop culture references, and even Adam as Sean yelling at a fictional baby to stay in character whilst they prepared the mics for another take – it was insane comedy genius.  It is a bit different going to a recording as you get to see Adam as himself as well as his characters, plus it’s fun watching them retake.  Can’t wait till it airs.

They’ve changed the waiting area at the Radio Theatre a little since the last time I went, adding a BBC shop which I LOVED as I used to run one in my youth, and some fun bits of BBC history.  We watched the news being filmed for a bit before we were called in, and I bought a BBC Three pen as that’ll be worth a FORTUNE when that channel gets taken offline (ha!).  It’s quite a comfortable place to hang about in now. 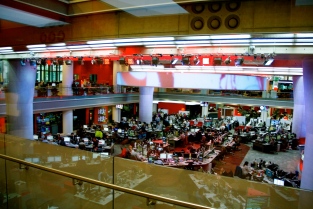 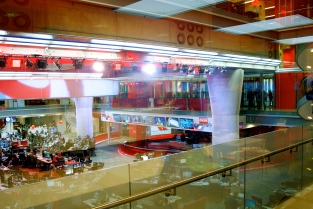 Sophie Raworth was doing the news 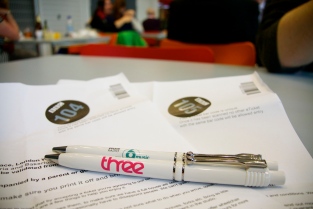 The side of the Ident 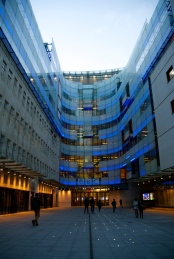