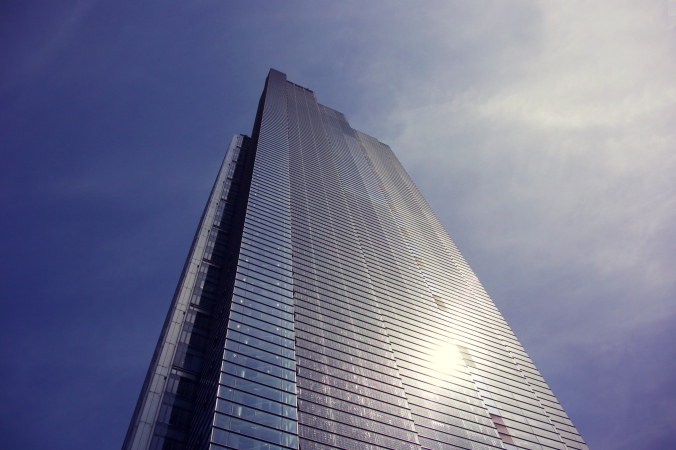 About two months ago, I set myself a reminder to go online and book a table for the Duck and Waffle to celebrate Husband’s birthday.  I knew from previous attempts at getting a table that the booking opened two months in advance and tables got booked up really quickly – I went online at about 10am back on the 15th of June and they almost had nothing left!  It felt extraordinarily elaborate at the time, but I hoped it would be worth the wait.

I think this photo demonstrates just how worth it our visit was. 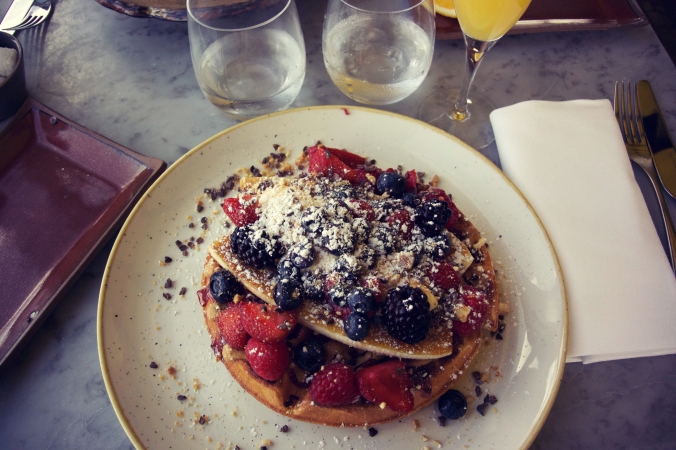 Yeah, I went all out.

Situated on the 40th floor of the Heron Tower in the City of London, the Duck and Waffle is one of those restaurants with an obscure dress code (“casual elegance”) and enough trendiness to intimidate me a little.  I think I freaked Husband out with how anxious I got – should I wear this dress/these shoes/what if they don’t like tattoos?  I was convinced that we’d get there, all sweaty and hot after the walk from Waterloo, and the doorman would just shake his head at us and point us out the door.

I overreacted somewhat as every single member of staff we spoke to was lovely.

The entrance is an unassuming doorway on Bishopsgate with no real presence on the ground – you immediately walk into a lift lobby to wait for the lift to whizz up the 40 floors.  I couldn’t decide to look up (as in my photo) or out as you don’t really get time to do both.  Husband meanwhile was almost crouched in the corner, as he has a fear of heights particularly in glass lifts.  I felt quite mean taking him in one for his birthday.

We were very lucky to get a window seat overlooking north/north-east London, not quite the ‘best’ side of the building which had views of the Gherkin, but I was excited to have any view.  I spent most of my time watching the people wandering in out of Liverpool Street Station.

As for the food, it was amazing.  I had the Full Elvis – “pbj, bananas brûlée, chantilly cream, all the trimmings” and as soon as the waiter put it on the table, I regretted it.  It was so BIG.  I’d seen photos online and thought I could handle it, but this seemed a lot bigger than the photos.  It was truly a thing of wonder though, and because there was lots of fruit on it, I could pretend it was healthy.  It was the first time I’d ever had pbj, and it tasted quite nice actually.  I think I can safely say this was the best waffle i have ever had. 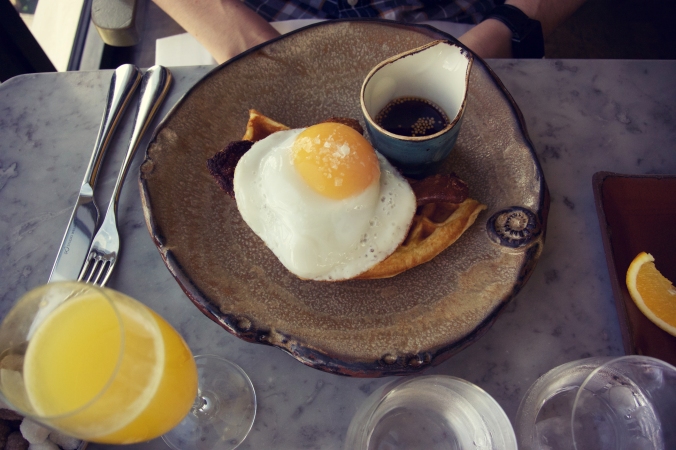 Husband took a while to decide what he wanted, and at one point was leaning towards the Colombian eggs, but I told him it would be a mistake not to have the duck and waffle.  So he did – “crispy leg confit, fried duck egg, mustard maple syrup”.  He could quite happily have ordered two as he enjoyed it so much.  We both had mimosas as well (a little pricy, but it was a birthday treat) and some incredible bread to share.

I wasn’t able to finish mine.  The shame.  I can’t believe I thought I’d be able to order a desert, but I was planning on trying their chocolate brownie.  That was not going to happen.  Husband could only manage a latte, which came with this adorable arrangement: 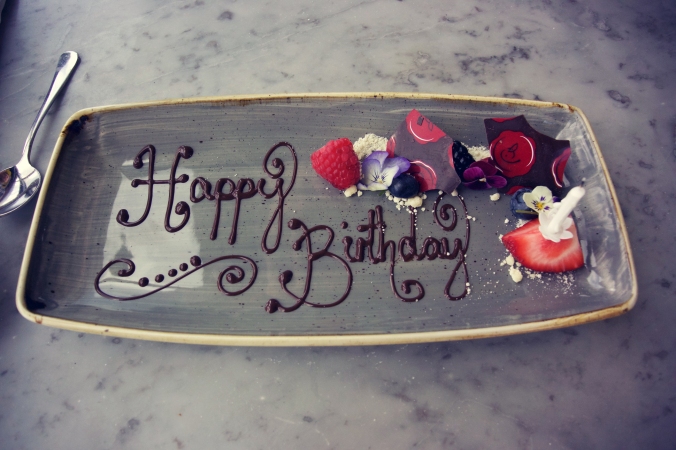 He was quite embarrassed, although pleased that our waiter said he was “18 today”.  It was a lovely touch.

We spent two hours in the Duck and Waffle, partly because we couldn’t get the waiter’s attention to get the bill, but it wasn’t horribly busy and cramped so we didn’t mind at all.  Husband was mainly putting off going back into the lift for as long as possible.  There is so much more food to try so we’re thinking about putting in another booking for two months time.  I’ll need to set a reminder on my phone.

I spent the rest of this afternoon messing about with tilt shift effects.  Look, so cute!!